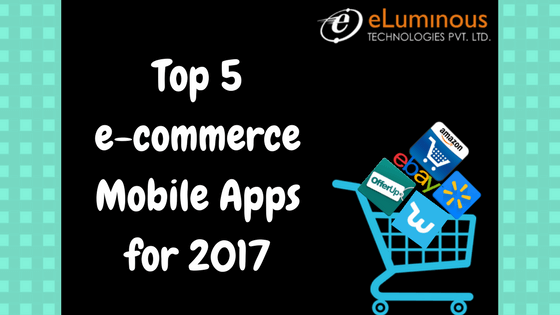 As smartphones have taken over computers and are the leading contributor to e-commerce. The mobile app is contributing around 60% in e-commerce traffic.

As a business owner, it is not just enough to have an e-commerce mobile app in place but it is equally crucial to select the right mobile apps development company that has experience in trending technologies, understanding customer’s buying behavior and offering user-centric solutions.

Let’s have a look at the top 5 e-commerce mobile apps:

Amazon – Amazon is the main leader maker who sets the further development of the wholesale Internet business of the most developed countries in the world. However, in 2004 top managers of Amazon understood that the future of commerce would depend on the mobile shopping app. Currently, Amazon offers more than 30 own developed Android Apps. It was opened on March 22, 2011, and was made available in nearly 200 countries.

–  After separating from PayPal, marketplace company eBay has refreshed its mobile apps in 2015 with a more streamlined experience. This redesign is part of eBay’s plan to consolidate all of its apps into one unified experience on mobile devices. eBay said that it is seeing 8.2 million new listings added to its marketplace via mobile apps per week. And eBay’s mobile apps generated $28 billion in mobile commerce volume. It’s no secret that eBay sees mobile commerce as its future.

– The first version of the OfferUp Android and the iOS app was launched in November 2011.  OfferUp’s users can browse through the locally available products without signing up for the service. To transact or communicate with the seller, they need to sign up for free on the site. For posting ads, the user just needs to take a photograph of the product they wish to sell and upload on the site with payment and other details. Ads without images are not allowed on the site.

– Wish is a typical marketplace that connects buyers and sellers. The app doesn’t hold any responsibility for shipping, product quality, and the content posted on by sellers.Moreover, it doesn’t have any control over the items listed in the app. Wish provides a huge market for small retailers with big brands so each business can establish a strong online presence. Now, merchants need to do is to find out the customers and connect with buyers.The app works as a mediator between buyers and merchants. But it’s not directly involved in any transaction that takes place between both the parties. It means sellers are accountable for delivering e-commerce services to the clients.

– Walmart is a relatively new player on the mobile app scene. This fact makes it more impressive. Customers can use their smartphone and shop at the store.  The app has other features such as the ability to refill prescriptions at the Walmart pharmacy, store shopping lists, and arrange online orders.

Every app has its own features and is unique within itself. Connect with our best mobile app developers and discuss your new project.