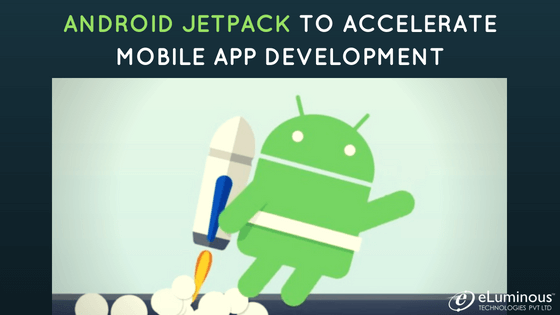 Android Jetpack! Have you heard about the term or not? Google CEO Sundar Pichai made some of the biggest announcements at the Google I/O 2018 Developer’s Conference & the one was in the spotlight was the introduction of Android Jetpack. Android Jetpack is introduced to accelerate the mobile app development process.

What is Android Jetpack?

In simple words, Android Jetpack is a set of components, tools and guidance to mobile app developers make great Android apps. These Jetpack components are providing additional architectural components & extended library support. What does it include? 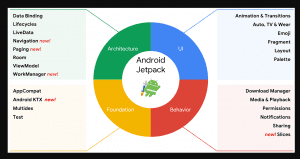 With these, it also has the support of ‘unbundled libraries’ which allows developers to adopt each component at their own speed & time. As Jetpack gains the functionality, the apps can be added and deployed into the Play Store, You can offer new features to your users in just one day; provided that you are quick enough.

Work Manager is a brand new component/library known as WorkManager. You will get all solutions related to constraint-based background tasks at one place that needs to be surely executed and substituting the need to use things such as jobs or SyncAdapters.

It offers simple API which in turn lets the developers work on devices without taking any help from Google Play Services. In addition, you can also develop graphs of work besides enquiring the status of work.

Navigation helps to structure User Interface (UI). The developers may face challenges in developing in-app navigations while sharing & transition of data. Now, what is that inconsistency? Talking about the Android platforms, screens can be created with a couple of things; first is taking an activity for every single screen, while the second option is taking single activity and different fragment for each of the screens or maybe a mix match.

This becomes a challenging task for the developers. Thus, Navigation has been launched to address that issue and make things easier.

This component offers full extended support to Fragments with an added advantage of Architecture Components with ViewModel & Lifecycle.

The Navigation deals with the intricacies related to FragmentTransactions. You can declare the transitions with the help of Navigation component and getting the automatic Up and Back behavior.

Many popular apps contain a huge amount of data & Google has brought the paging component 10.0 which can be used for loading & presenting huge data. It boosts the speed of endless scrolling with RecyclerView.

Google had formally declared its full support to Kotlin language apart from Java to develop mobile apps. Now, with the release of Android Jetpack, Kotlin as language has become more productive and transformation of codes has become much easier than ever due to the presence of Android KTX.

The AndroidKTX is known as a group of extensions to the Kotlin language, which simplifies it and  reduces the Boiler Plate code. Let’s analyze this with an example:

This following code will become shorter something as

Since the announcement from Google to support Kotlin, the mobile app developers have already adopted it in large numbers. Google is trying to better Kotlin libraries, runtime, documentation and training.

Slices alpha is the new & last Android Jetpack component. A slice is a method through which you can surface your app’s UI inside the Google Assistant as a result of a search.

Google has launched Android Jetpack Components to speed up mobile apps development offering a wide range of assets & assist mobile app developers with support to Android Studio & Kotlin language.  Let’s make use of it to implement your next idea!