App Monetization: 6 Ways To Make Your App A Money Spinner 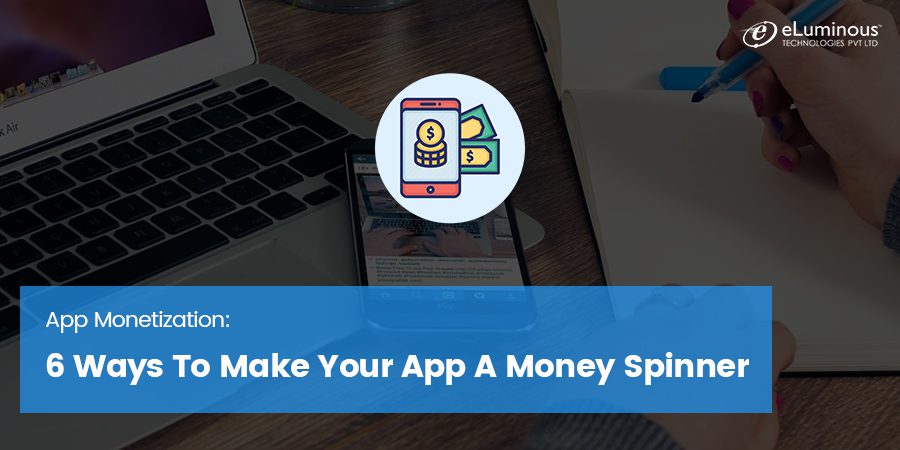 While the mobile app market doesn’t quite have Forbes making an annual rich list for it yet, it’s clocking some serious numbers around the world. This has made business owners, investors, and serial entrepreneurs flock to the idea of building and marketing mobile apps.

However, building an app with a developer or custom mobile app development company is a different ballgame from monetizing it. What is app monetization? It’s a set of marketing strategies to help you earn money from your mobile app.

But before talking about how to monetize an app, let’s look at the numbers we previously referred to. As this graph shows, worldwide consumer spending on mobile apps has grown consistently over the years and is poised to breach the $170 billion mark by 2024. 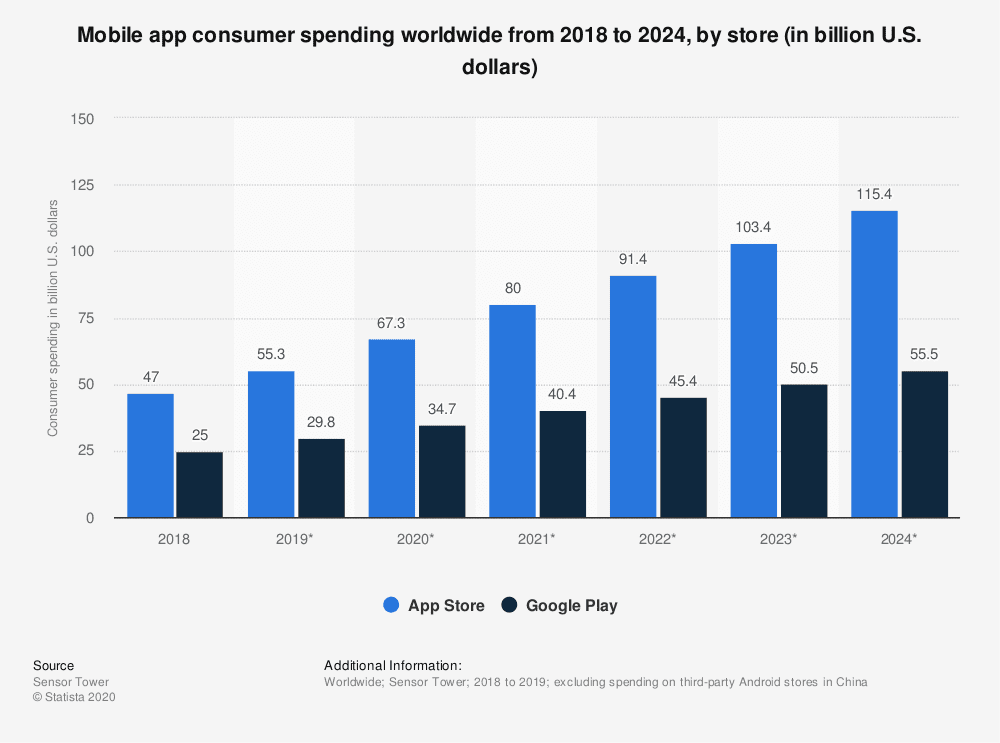 In fact, as a custom mobile app development company, we wouldn’t be surprised if the graph’s linear curve turns into an exponential one between 2020 and 2024. That’s because the amount of time that people spend on their phones, and more specifically on their apps, is growing fast. 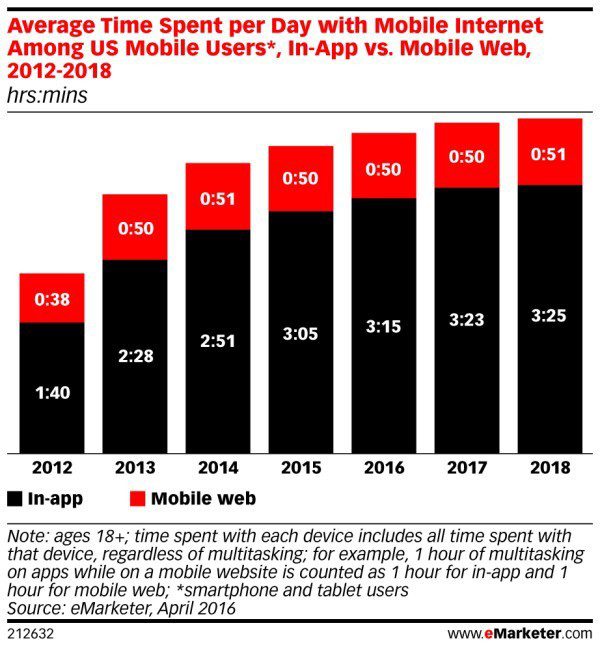 As this chart shows, Americans spent close to 3.5 hours per day on their mobile apps in 2018. It goes without saying that by the end of 2020, that figure might well be closer to 4 hours per day.

This means that by choosing the right app monetization models, you can build a sustainable source of revenue through your mobile app. Read on to know what are the most popular ways to monetize an app.

How to Monetize an App Idea with App Monetization Strategies?

In-app advertising refers to ads displayed within an app. App Annie reckons that over 62% of mobile app revenue in 2020 will come from in-app advertising alone. The reason for this app monetization technique’s popularity is two-fold. Users love free apps and app owners want as many users as possible for their apps.

But there’s a flipside to in-app advertising – it can affect your app’s user experience if not done correctly. For instance, if the ads are too distracting or annoying, your users will be put off.

That’s why you should make these ads non-intrusive, targeted, and relevant to your users. This way, not only will your users find value in the ads but advertisers are likely to pay you well too.

An in-app purchase model lets you keep your app free to download and use while charging for additional features and services. For instance, consider a dating app such as OkCupid which is free to use but charges extra for features such as ‘Who viewed your profile’.

While not as big as in-app advertising, in-app purchases are steadily growing with Sensor Tower reporting they clocked $50.1 billion in H1 2020. Interestingly, $36.6 billion of that came from gaming apps alone.

To be successful with this model, you need to ensure it adds to your app’s experience. Also, avoid the temptation to bundle even the most basic of features as a separate purchase. If your target audience feels the purchase doesn’t add enough value, they’re likely to feel cheated.

Premium or paid apps can be downloaded by a user only after they pay for it; think popular apps such as Dark Sky, Tasker, and even Nintendo. On the bright side, premium apps report higher user engagement and loyalty as people like to use what they’ve paid for.

On the downside, only a tiny percentage of such apps end up building a decently sized user base. For instance, Cambridge researchers found that just 20% of paid apps crossed 100 downloads while only 0.2% of them achieved over 10,000 downloads.

So, how do you know if this is the right path for your app? You can start by looking at your current competition. Does your app offer enough additional features or user experience to sway users away from rival free apps?

If you pick this model, highlight the central value of your app from the get-go. Hammer this point through the app’s page and UI. If possible, also try to get as many top ratings as you can and get it reviewed by influencers or tech publications.

Free to download and use but pay to use restricted content or features – that’s how the freemium app monetization model works.

And it’s a good strategy too as almost 94% of Google Play apps follow this model. There’s also research that shows the freemium model helps increases the sales of premium or paid apps. Hardly a wonder then that apps such as Spotify, Evernote, Clash of Clans etc. prefer freemium.

If you’d like to go freemium too, make sure your users see enough value in the free version to find an upgrade worth their money. This requires a fine balancing act because if you make the free version too good, users might stick to it instead of upgrading.

Subscription models sit between free and paid apps, similar to freemium apps. In this model, a user pays to subscribe to your app for a fixed period.  Apps that use this model generally offer different subscription tiers of features, pricing, and duration.

While a subscription model is not widely popular among developers, the ones that do use it are happy with the results. As per a Mac Developer Survey, 52% of developers that used subscriptions to monetize their app reported a growth in revenue as well as the user base.

A subscription model not only helps you upsell your users gradually, but it also opens up a predictable revenue source. This can have a positive impact on your app development and marketing strategies, helping your app stay a step ahead of the competition – a virtuous cycle, if you will.

But the model is not without its challenges. For example, you’ll need to control subscriber churn as it impacts your revenue forecasts. That involves constantly and clearly explaining the benefits of subscribing to your users and keeping them engaged with new content/features, ala Netflix, Headspace, Apple Music etc.

Another variation of this is to partner with another app (not your direct competitor, of course) that your users frequently use. This is a symbiotic relationship as both parties can improve each other’s offerings as well as the user base.

A great example of this is the ‘Soundtrack your ride’ initiative by Spotify and Uber. Once a user books an Uber cab and waits for it, they’re invited to use Spotify to pick the music they’d like to hear during the ride. This simple idea went a long way in earning both apps a loyal fan base.

Turn Your App into an Asset

As you’d have learned by now, there are several ways to monetize your app and build a recurring, growing source of income out of it. But before you sit down to choose the right app monetization strategy, take a moment to answer these questions.

Once you’re done, you’ll have more clarity on how to generate revenue from a mobile app and which app monetization strategy (or a combination of them) works best for you.

If you need more help with building a mobile app and monetizing it, feel free to give us a shout out. As a custom mobile app development company right from the days when Symbian ruled, we’ve built thousands of profitable iOS, Android, and hybrid apps for clients in Europe, North America, Africa, and the Asia Pacific.

And if you liked this post, do subscribe to get informative posts about web and mobile development, data analytics, and ecommerce delivered to your inbox. Thank you for reading!