Why we think Ionic is the best platform for the Hybrid mobile apps development supporters? 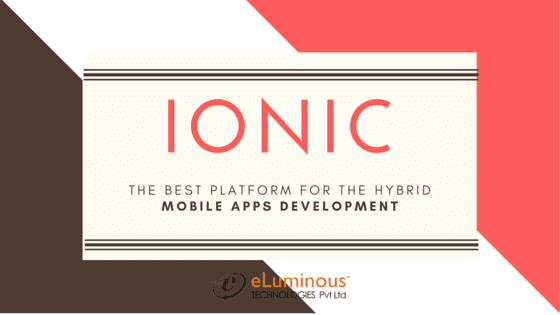 Recently our mobile apps development team came across so many clients who were confused with regards to the selection of the platform for their app. The debate between “which is better- hybrid or native?” is a never ending thing. Our team has developed more than 100 apps, but still the question is unanswered as each one of them had their own pluses and limitations. When I was a part of one of the projects, there was a big puzzle in front of me related to this hybrid and native platforms. And then one of my boss’s put Ionic in front of me which helped me find that missing piece of this jigsaw.

To be honest, Ionic is not a complicated deal for app developers. But if you are in a customer’s shoe, there is a lot of confusion when it comes to deciding what platform one should go with. Ionic, from what I experienced, is amazing with respect to the UI features that it offers – the best part is the development time and the cost, especially when the app is expected to run on multiple platforms like Android and iOS. Most of the coding effort is a generalized one and you can add platform specific coding, depending on the OS you want to run the app. Ionic is a platform built to satisfy the hybrid developers, as every minute aspect is logically covered and no stones are kept unturned. Of course, a coin always has two sides, so does the ionic platform. Let’s find out how to decide whether ionic can be a suitable platform for your next mobile apps development project.

1. Supports Multiple Platforms (makes it cost-effective): The best part of hybrid platforms like Ionic is that you don’t need to learn different complex technologies if you want to launch your app on multiple platforms like Android and iOS. Usually, only super-brilliant developers tend to take the challenge of being the masters in both the native platforms. An average developer will think of being a master in just a single platform that he is familiar with, and would need a different developer’s help if the client needs to launch an app on both the platforms. Developing an app in Ionic is ideal for those who do not have complex and lengthy apps, but have to offer small sized apps for their users on both the platforms.

2.  Ionic knows to keep up with the trends: The best thing I found in Ionic is that it offers the UI functionalities that look just like Native. There are no other hybrid platforms that offers features as much as ionic. For e.g.,

3.  Massive Community Support: It’s such a wonderful thing to see how ionic was evolved from being a framework to being a platform. Ionic is built on the grounds of AngularJS for developing hybrid mobile applications via Apache Cordova. Being such a popular platform, it has a huge user and developer community which has the answer to each and every question of yours. No matter how complex or basic your query is, the ionic knowledgebase and forum will answer them for you. The developers always co-operate with the community until the problem is solved.

4.  Creates Value for Customers: Further to the last point, the developer community is full of technology enthusiasts who keep adding features and make the platform more attractive and valuable. Every expectation of a hybrid app developer is satisfied with Ionic, adding value to the business as well. As it has the Angular JS and Cordova base, the developers also gain value by getting hands on these two amazing technologies as well, which are majorly used in most of the tools nowadays.

If you are targeting any specific OS for developing the app, the performance may not be the best. There are some features like Syncing in Background, Push notifications etc., which aren’t as good as native. If these are the primary features of your app; you may need to evaluate dependencies and relevant Cordova APIs before coming to the decision of developing Hybrid.

Hope this answers your basic questions. If you are still not sure about how Ionic will work for you, you may get in touch with our mobile apps development team who will suggest you the best solution as per your business need.