Android or iOS? Which platform you should go with? 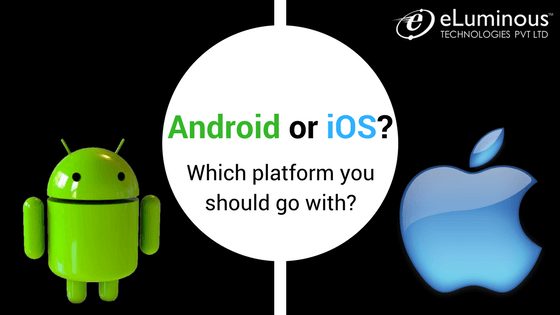 Recent surveys show that 96% Mobile app development is dominated by the two mobile apps operating systems iOS and Android. They have become so popular and competitive that they have left the mobile app developers & clients amazed and confused.

Are you worried about choosing your developing platform?

There are various factors that help in deciding which platform to choose and which to put next in line. The top ones among them include the objectives of developing the app for brand management, the time frame within which you want it ready and the budget at hand that you can spare for development.

The Android’s play store provides a variety of three million apps to its users to choose from while the Apple users can pick from less than two million apps present in their stores. This describes that the Android developers are operating more. But what’s more to it? Let’s find out.

Objectives to be accomplished

The objective of developing the app plays a crucial role in deciding which operating system to build on to meet your goals. If you want to design an app that is used by a variety of smartphone users, then Android is your right place but if you are looking forward to targeting a distinct population, you can start with the Apple operating system as well.

Time required to develop an app

The rules and regulations provided by the Apple’s operating system are specific and the developers have to strictly follow the rules. This keeps them focused and averts spending time on useless things.

While with Android platform, the things are quite different. The developer should make sure that the app is responsive and user-friendly. For this, you need to customize the app’s screen and resolution according to screen size and resolution.

When you have to measure the pros and cons of the two systems, you need to look into the development tools and styles and complication of each system. Check which one offers a variety of functions, and which one is easier to use. Taking a pick on the right one entirely depends on the professional app developer.

Another factor which assists the developers to decide which platform to pick is the licensing and membership achieving issue.  Publishing an app on the Play store or the App store has never been free. But if we tie in competition android app development stands out as the best.

Why is that so?

Because it doesn’t need any kind of subscription or membership fee. To publish an app on Google’s Play store, you need to pay a one-time $25 registration fee. On the other hand, if you’re developing an app for iOS, you need to spend around $100 annually.

Both the platforms are high yielding and all you need to do is make the right choice by focusing on your goals and viewing them come true through the mobile app operating system you have picked.