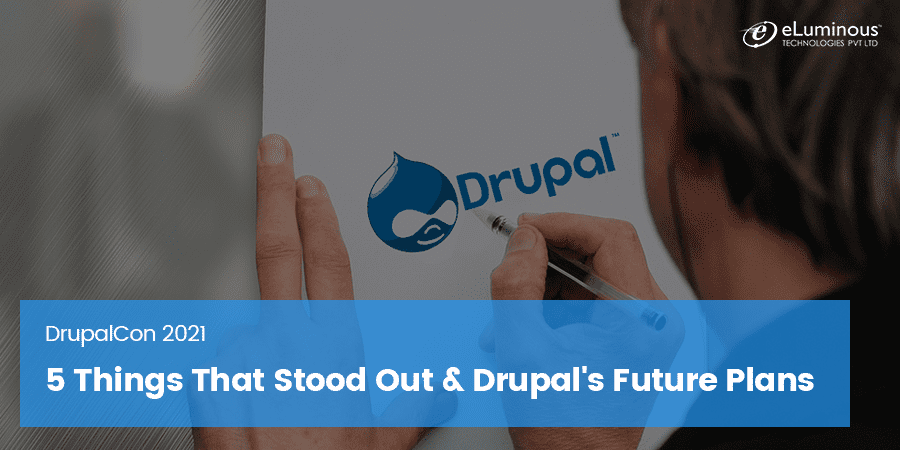 It’s been a few months since the (virtual?) curtains on DrupalCon North America 2021 fell. But many things about the event and what it holds for the future of Drupal continue to make news. Like last year, the 2021 edition of DrupalCon too was held online and received an even higher number of registrations, with over 2,200 people attending the event.

There were several highlights spread over the five-day gala, which is why we decided to pick five things that stood out in DrupalCon 2021. If you’re going to hire Drupal developers for your next project, this post will help you to know what the future of Drupal looks like.

i) Decoupled Drupal is around the corner

Talk about a decoupled Drupal has been doing the rounds for quite a few DrupalCons now. But this time, it was prominently featured in conversations around Drupal’s long-term evolution. For instance, there were quite a few case studies that showcased live decoupled Drupal websites.

Moreover, conversations about solving the challenges involved in shifting towards a decoupled setup were hard to miss. For example, Drupal’s Decoupled Menus initiative attracted a lot of attention, as dealing with menus is one of the major pain points when transitioning to decoupled Drupal.

You can’t talk about decoupled Drupal without also reflecting on the need to modernize Drupal’s JavaScript libraries. This was an important conversation as the modernization, although massive in terms of scale, will result in a better user experience, cue the more up-to-date rich text editors.

Over the last few years, Drupal has worked towards shedding its image of being a laggard when it comes to timely updates and major releases. This has made more people confident about updating to newer versions such as Drupal 9 as the updates take less time and are also more stable. From a business point of view, this predictability makes it easier to plan security patches and long-term support.

As a web application development company in USA, we found it interesting that a major part of the keynote address at DrupalCon 2021 was cornered by the need to improve Drupal’s site builder and contributor experience. Two aspects drove this reprioritization, a) acknowledgment that these experiences were given the short end of the stick in the rush to modernize Drupal and b) as Drupal draws its strength from an open-source, vibrant community, focusing on better site builder and contributor experiences will only add to Drupal’s growth.

While the shift from Drupal 7 to Drupal 9 is still a WIP, Drupal 10’s features and readiness received a lot of attention at DrupalCon 2021. For instance, news that a module store could be part of Drupal 10 created quite the buzz as it will make the CMS even easier to work with for beginners.

As of now, Drupal 10 is being prepped for a 2022 release, ideally around June-July but no later than December in the case of any hurdles. You can follow updates about Drupal 10 on the community blog and check out the main issue page for a summary of the progress till now and the road ahead.

DrupalCon 2021 had a string of amazing sessions by speakers from across the board. But one that stood out for us was delivered by Mediacurrent on the important topic of open-source security. This was important because of the pace at which Drupal is being adopted by businesses and the impact (almost $1 trillion as per CSIS) that cybercrime is having on enterprise security.

If you’re planning to hire dedicated developer for Drupal or want to optimize it for better security, get your hands on this part of the conference and learn how you can become a security-first organization, reinforce your Drupal security, put in place a clear security policy, and adopt process automation.

Any conversation about DrupalCon’s sessions cannot exclude Driesnote, and this year’s Drupal summit was no exception. Dries Buytaert, the founder of Drupal, is an engaging speaker and delivers highly anticipated presentations on Drupal’s future at every conference.

After beginning with a look-back at Covid-19’s impact on Drupal, Dries quickly moved onto Drupal’s future and how it hinged on delivering a better ‘out of the box’ experience to users by focusing on simplicity and more point-and-click functionality. We’ve already talked about decoupled menus, automatic updates, and Drupal 10’s readiness previously. To add to that, Drupal will also soon get a new front-end theme that will be more modern and accessible than the current default theme.

Another notable session was by Nuritzi Sanchez, the program manager at Gitlab, who talked about improving collaboration and taking it beyond the product or engineering teams.

DrupalCon sessions often touch upon the full spectrum of software development and there was no better example of this than the session by John Richards II, a developer advocate at Pantheon. He talked about the most optimal way to take on a legacy project where version control is hazy, the core is ancient, and the documentation is attracting dust for over a year.

As a custom web application development company, we also loved the Fireside Chat that focused on the centrality of JavaScript to modern web development. If you want to know the key things you should consider when adopting JavaScript for your project today, this is a great session that touches upon the opportunities and challenges in using JS front-ends for Drupal projects.

The role of Drupal in keeping businesses stay afloat and grow during the pandemic was already well-known. But what DrupalCon 2021 brought to light was that Drupal is also powering the digital infrastructure of organizations that are playing a significant role in battling Covid-19. For instance, Drupal powers the website of all except one of the major Covid-19 vaccine producers.

Overall, each of the five days of DrupalCon 2021 lived up to its hype and more. The selection of topics and speakers was diverse, so picking the top five highlights here was anything but easy. You can catch all the sessions and keynote events we’ve talked about in this post on the Drupal Association’s YouTube channel.

If you’d like to know how these developments in Drupal affect your project or the decision to hire Drupal developers, please drop us a message. Whether it’s creating a new Drupal website, shifting from your existing CMS to Drupal, or even migrating from an older version of Drupal to Drupal 9, our web developers can help you. Thank you for reading! If you liked this post, subscribe to get informative posts about web and mobile development, data analytics, and eCommerce delivered to your inbox.