PHP vs Python vs Laravel vs Mean Stack: A Web Development Shootout 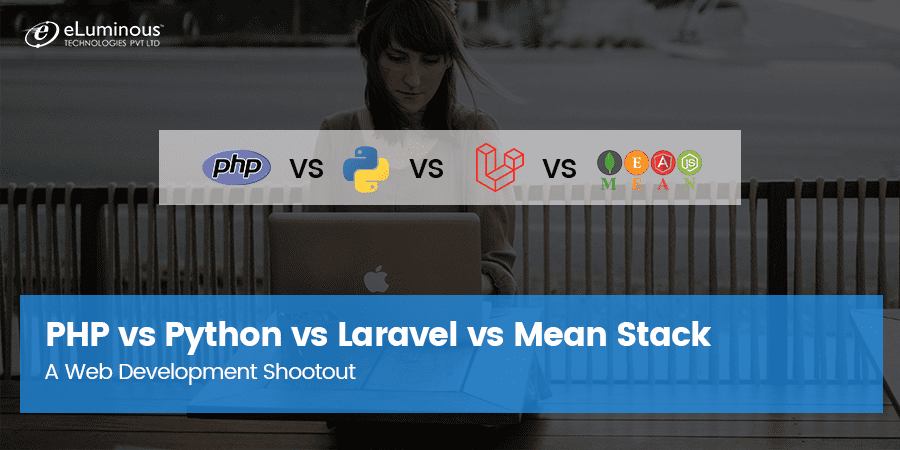 When the times comes to fleshing out your web application idea into an MVP, it’s tempting to go with technologies that you (or rather, your developers) are most familiar with. This is not a bad idea per se, as familiarity breeds faster development.

But as significant as that is for an MVP’s success, it’s not the most vital factor. For the MVP to lead into a product that truly addresses the concerns and needs of your target audience, you need to choose technologies while keeping ‘fitness of purpose’ in mind.

In other words, your project’s use-case determines this choice. In this comparison, the four popular web application development platforms, PHP, Python, Laravel, and Mean Stack, are all suited to a wide range of use-cases.

As a product owner, this can make it challenging to choose the correct web development framework for your purpose. To make your task easier, we’ve compared these four web development platforms by listing out their significant pros and cons.

Among the most popular web development frameworks of all time, PHP is preferred by developers for its simplicity, efficiency, and popularity. If you plan to hire PHP developer for your project, work with experienced hands who can help you make the most of PHP’s advantages while avoiding its pitfalls.

Read more: PHP vs Python – Which One to Choose from a Business Perspective

Based on PHP, Laravel is an open-source, full-stack framework that offers a rich set of features to develop different web applications. This has led to Laravel becoming a popular web application development platform with businesses.

Read more: PHP is Dead – And Why That’s a Lie You Shouldn’t Fall For

An acronym for MongoDB, ExpressJS, AngularJS, and Node.js, MEAN stack is a collection of open-source JavaScript frameworks uses chiefly for building dynamic websites and web applications.

Read more: Angular vs React in 2020: Which Is Better for Your App, Project, or Business?

While we’ve laid out the pros and cons of what are unarguably the most popular web development platforms used today, the choice to hire dedicated developer should still be guided by your project requirements.

This means, for instance, you should be willing to overlook a particular flaw (such as PHP’s relative antiquity) or forego a virtue (such as Laravel’s faster development cycle) if that’s what your project requirements dictate.

If you’re still unsure about the right way forward for your project, talk to our experts now. As a custom web application development company, we’ve built over 2,000 websites and applications for clients in the Americas, Europe, Asia Pacific, and Africa.

Thank you for reading! If you liked this post, do subscribe to get informative posts about web and mobile development, data analytics, and eCommerce delivered to your inbox!