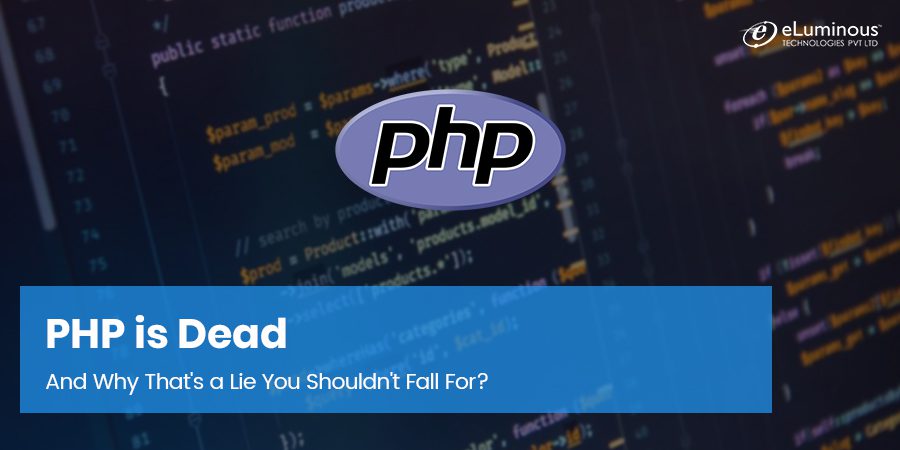 But then again, that’s our standard response when we get questions like these,

And as a web application development company, we get them a lot!

So where do these concerns stem from? What’s changed so drastically to have rendered one of the world’s most popular programming languages increasingly irrelevant?

While this question, and its variations, have been doing the rounds for almost a decade now, they rise to the forefront when something important happens in the development world.

And in this context, that important thing was WordPress releasing its new editor, Gutenberg.

While WordPress users welcomed the convenience offered by Gutenberg, more eagle-eyed ones noticed that those blocks are written in JavaScript, and not PHP.

When coupled with the fact that WordPress is the most widely-used CMS in the world, this breathed new life into the ‘is PHP still popular’ question.

So is it dead? The data says otherwise. 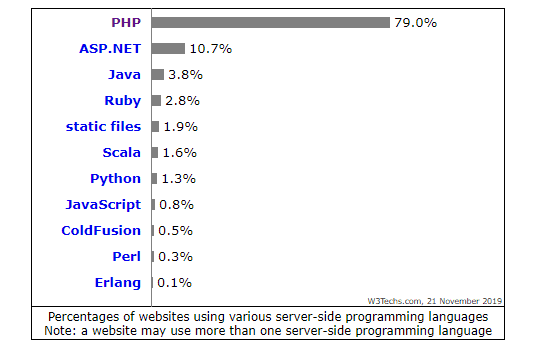 According to W3Techs – which as per its description provides information on various technologies used on the web – 79% of all websites using a known server-side programming language are based on PHP. In fact, as the graphic below shows, the percentage of websites using PHP has remained more or less the same in the period between November 2018 and November 2019.

So much for claims of PHP in 2019 being at the beginning of its end! 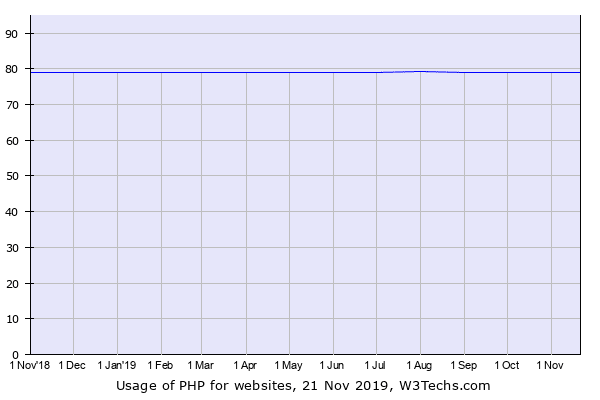 To be honest, these numbers aren’t exactly revelatory. After all WordPress, which uses PHP, powers well over a third of all websites on the internet. 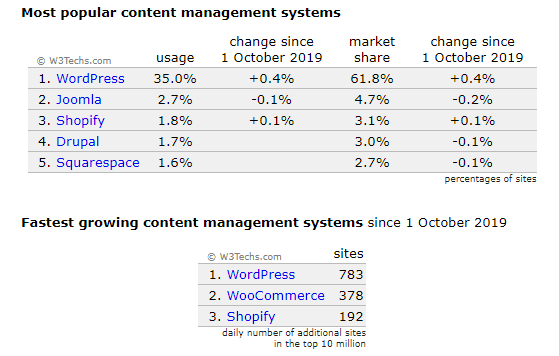 And as this image shows, WordPress is adding a lot more (almost 2x that of the next best) new users than other competing content management systems.

In fact, as a PHP development company, we develop WordPress sites for a variety of use-cases and these numbers vindicate our belief in WordPress as well as PHP.

So why the clamour for PHP’s demise?

There’s a difference between people wanting PHP to die and PHP deserving to die.

And it’s pertinent to examine if the reasons offered by the people claiming ‘PHP is dead’ hold up to facts.

Let’s look at each of them individually.

PHP is not scalable

Unfortunately for the naysayers, PHP is immensely scalable. As we’ve mentioned above, it powers WordPress, which is a powerful CMS used by individuals as well as enterprises like The Washington Post, Walt Disney, and Microsoft. In fact, we’ve previously talked about why enterprises should go for WordPress by setting aside their scalability concerns.

Moreover, PHP is also used by other behemoths like Wikipedia, Facebook, and Pinterest. All three websites serve millions of visitors every day worldwide without breaking a sweat.

So, no – the claim that PHP isn’t scalable is patently wrong.

PHP has gotten exponentially faster with the release of each version.

According to Kinsta, a managed WordPress hosting provider, PHP 7.X performed two-three times faster than PHP 5.6 in most of their benchmark tests.

And it’s not just its older versions that PHP 7.X is thoroughly outperforming.

PHP 7.3 is also faster than Python 3.8.0, a programming language it’s often compared against, unfairly we might add.

That’s because while PHP is predominantly used for web development, Python is more of a general-purpose programming language.

But if you’d still like to know how PHP and Python fare against each other, we’ve compared them for you.

PHP is not secure

PHP is one of the oldest programming languages out there. It’s also one of the easiest to learn.

These two factors together lowered the entry barrier to learning PHP, which meant a lot of people with questionable or inadequate skills swelled up the PHP programmer pool.

Products coded by such programmers inevitably led to people asking the wrong question – is PHP unsecure? – instead of asking the right one – where does one find a good PHP programmer?

What we’re saying is that the security of your PHP-based product is only as good as the PHP developer(s) who built it.

It also bears mentioning that most older versions of PHP are less secure and have fewer features than later versions. And unfortunately, a fairly large number of sites using PHP use older versions. 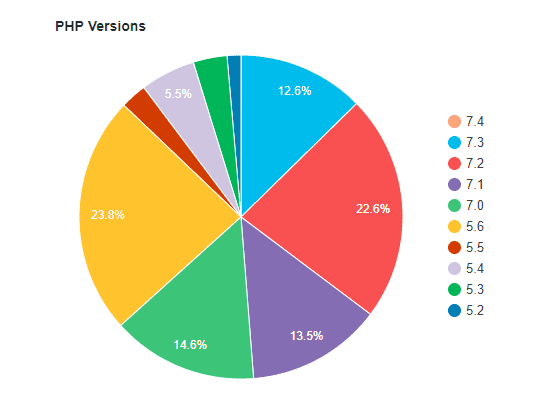 For instance, WordPress reports that almost 60% of WordPress websites are using PHP 7.0 or older, with almost 24% using PHP 5.6 alone.

This is important because older versions of PHP lose active as well as security support with time. For instance, as gleaned from the above graphic, PHP 7.0 and older haven’t received active support for a while now and more importantly, will not get security fixes from 1 January 2020 onwards.

The bottom line is, if you use PHP 7.X and work with a reputed PHP developer or PHP development company, security should not be a concern for you.

So why should you go with PHP?

Now that’s a much more reasonable question to ask.

What makes PHP so popular and what’s in it for you?

PHP developers are easy to find

Being the most popular programming language, it’s easy to find PHP developers to build your product. More importantly, you can choose from a large pool of experienced programmers for PHP, which is not something you can say for newer entrants like Python.

With an experienced PHP developer or web application development company, you can build an MVP not only quicker but with greater quality.

PHP is an open-source server-side programming language, which means you don’t pay anything to use it. Another benefit of being so popular is that PHP development costs are far lower than with other languages.

And when you consider that you can save time by developing with PHP, it can prove the difference between going boom or bust for entrepreneurs working on a tight budget.

Yet another advantage that can be laid at the feet of PHP’s popularity is its massive community support. Communities are a great thing to have when your developers run into issues.

They can help you focus on the bigger picture instead of having to reinvent the wheel for every little problem you face. The PHP community is also a massive source of tutorials and documentation that you can tap into for solving issues or training your developer staff.

PHP is going to get a lot better

Those are just a few of the most important improvements in PHP 7.X. As mentioned above, many of these changes have made PHP 7.X exponentially better-performing and faster than older PHP versions.

This momentum will be sustained with future versions of PHP as well. For instance, PHP 8 will feature a JIT (Just In Time) compiler, which will result in better memory management and faster execution of code. PHP 8 is also expected to get enhanced machine learning capabilities than its predecessors.

Overall, you cannot go wrong by choosing PHP for your future development needs. Whether you’re building a simple website or a more complicated web application that has elements of AI and ML, PHP is more than up to the task.

No PHP development company or developer would be churlish enough to say PHP is a perfect programming language. It has several flaws with many of them inherent. Yes, it’s market share is indeed eroding.

But it’s by such a minuscule measure that it’ll take years, if not decades before PHP is fully confined to the dustbin.

Moreover, as an open-source, cost-effective, easy to work with, and widely supported programming language, PHP is close to peerless. By choosing to develop with PHP, you are assured of quicker development and troubleshooting, fastidious support, and reasonable costs.

Now, who would want something like that to die!