PHP vs Python: Which One to Choose from a Business Perspective?(Part II) 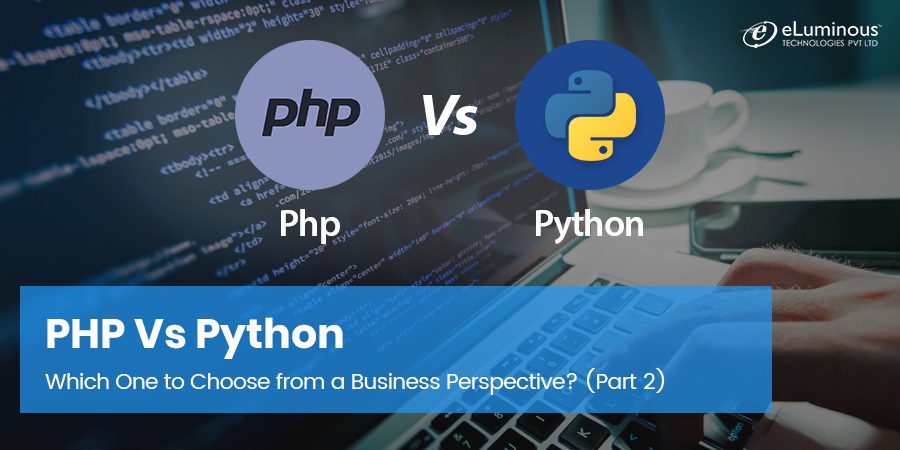 In the first part of this blog, we compared PHP and Python on aspects like ease of learning, readability, library support, framework, speed, and debugging. Even if you’ve hired a web application development company to build an app for your business, knowing how PHP and Python fare against each other can help you with business-critical decisions. After all, if you are in the online business, every tech-related decision becomes a business decision.

So, without further ado, let’s get down to it and understand which among PHP and Python is better for your business web application.

Strong community support comes handy when your developers run into a wall. Communities also free you from having to reinvent the wheel and instead focus on making your application more feature-rich and competitive.

Both PHP and Python do well here although the nature of their communities differs. For instance, PHP is primarily used for web development. Python though is a general-purpose programming language and has wider applications beyond just web development.

So, when it comes to purely web development, PHP edges Python in terms of community support. The tables are turned however for areas like Machine Learning, where Python takes the lead. And as web application development company participation in Python web development increases, the community is bound to get stronger.

As such, it would be fair to say that the PHP vs Python clash is a draw when it comes to community support.

Carrying forward from the previous point, Python is far more versatile than PHP. It can be used for varied use cases like data science, research, software development, and of course, web development. And as mentioned before, Python also lends itself better to Machine Learning, NLP (Natural Language Processing), Image Processing etc. This allows businesses to provide algorithm-backed customer services and increase their ROI in the long term.

That said, PHP can also be used in areas other than web development. However, the libraries required for those implementations are just not as robust and advanced as those of Python’s.

As the world’s most popular web development language, PHP is far ahead of Python when it comes to hosting support. Thanks to seamless compatibility, PHP is also supported by almost every hosting provider. Together, these factors make it a lot cheaper to host and run PHP web applications.

Hosting support for Python is less common and expensive. That is because it requires the hosting provider to install separate software on its servers to run a Python app. This drives up the hosting package cost, which makes it less attractive compared to a PHP hosting package.

Both PHP and Python are open source and completely free. This puts them far ahead of some other paid web frameworks out there. But this doesn’t mean that developing a web application costs the same with PHP and Python.

Both PHP and Python underpin some of the largest and most widely-used web entities in the world. PHP, for instance, powers the backend of traffic-heavy sites like Wikipedia, WordPress, Facebook, and MailChimp. Python too fuels some of the world’s popular websites like YouTube, DropBox, Quora, Google, and Spotify. This is proof that both PHP and Python fare very well in terms of scalability and security.

To some, this comparison might come across as unfair. After all, PHP’s near-exclusivity as a web-development language cannot be compared to Python’s all-round prowess. But even if we were to compare the two on web development alone, it would still be a close call.

That is because it is important to remember that in spite of its many positive attributes, Python still powers less than 1% of websites globally. PHP has been around forever and with the launch of version 8.X in 2021, is set to become faster and better-equipped with features like a JIT (Just in Time) interpreter.

The choice between PHP and Python then depends upon the project and its complexity. If your business needs simple websites and web applications, PHP fits the bill perfectly. But if it requires products that are more complex and flexible, you cannot go wrong with Python.

If that choice doesn’t seem as simple to you or if you’d like a second opinion from a seasoned Python and PHP development company, please reach out to us. As a web application development company that dabbles in both PHP and Python web development, we can suggest an appropriate framework and solution that fits your specific business needs.