Magento vs Shopify: Which One Should You opt for Better Sales? – Part II 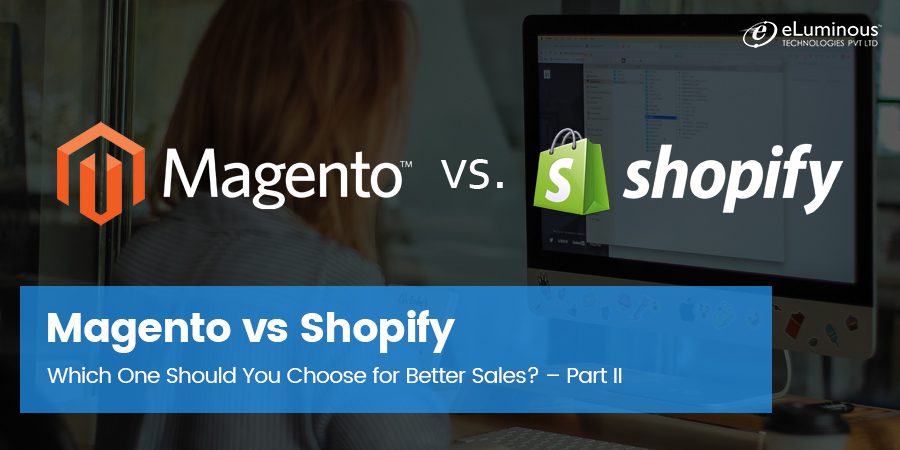 In the first of this two-part series, we compared Magento vs Shopify on parameters like ease of use, themes and templates, apps and add-ons, and payment gateways. These are four of the most essential things you need before selling your products and services online. Getting things up and running is simple on both platforms, albeit one involves more investment. Even if you go the totally hands-off approach, it does turn out cheaper to hire Shopify experts than Magento ones.

But there is more to selling online than just setting up an online store and adding a payment gateway, where Magento seems to lose ground to Shopify. If you want your new online store to remain viable in the long term, you need to keep the store growing and control overall costs. How do Magento and Shopify fare on those counts? Let’s find out.

Inventory management lets you itemize and catalogue all products and services that you want to sell on your eCommerce store. Not long ago, Shopify used to levy an additional charge for adding large inventory. That has now changed as it lets you to add an unlimited number of products to the inventory.

On Magento too, there’s no limit to the number of products you can list. The process of creating a product listing is easy on both platforms. But where Shopify pips Magento is in the direct integration with dropshipping apps like Oberlo. Dropshipping lets a merchant buy a product and have it shipped directly to the customer. In other words, the seller is freed from the task of handling or storing the product altogether.

Also worth mentioning here is that while you can add an unlimited number of products to Magento, doing so might affect your server performance and site loading speed. That’s because, with Magento, you have to manage hosting on your own. This means there’s always a danger of running out of bandwidth and storage.

With Shopify, this is not a concern as the platform is self-hosted. The hosting for your online store is fully paid for when you buy a Shopify plan, all of which offer unlimited product listings. Yes, you do pay if you want to hire Shopify experts. But given how much more popular Shopify is than Magento, it works out easier and cheaper hiring talent to work on the former.

Once you’ve created your eCommerce store, it’s essential for people to discover it. While social media integration does its part in drawing visitors, ecommerce SEO ensures your store is discovered and ranked well by search engines. This will get a steady stream of visitors to your store, thus helping your business grow.

Both Magento and Shopify score well in SEO (search engine optimization) features. Both are viewed favorably by search engines like Google, which means a good SEO campaign can really boost the search ranking of your online store.

Optimizing content on both platforms is easy as well. From adding Meta descriptions to alt text for images and social media links, rarely will you find yourself lost. Both platforms also offer numerous apps and extensions to further enhance your store’s SEO.

However, Shopify’s marketing arsenal has a slight edge here if you’re going to include blogs in your SEO strategy. The blogging feature is natively integrated into the Shopify platform. Compare this with Magento, which needs some coding to get the blogging feature going. But if you can afford a developer, a Magento blog scores over a Shopify blog as far as customizability is concerned.

Cost is where these two differ the most from each other. For example, Shopify’s costs are more recurring in nature while with Magento, a major part of the overall cost is incurred at the beginning. Let’s breakdown the costs for each platform to make your decision easier.

While it might seem that Shopify has a higher recurring cost, note that all its plans give you unlimited bandwidth, storage, fraud analysis, free SSL certificate and 24/7 support. All these are must-have features for eCommerce stores and help create a favorable impression in the minds of potential customers. With Magento however, you’ll need to shell out additional money for each of those features.

Magento vs Shopify: Which One is Better?

From the looks of it, there’s not much to differentiate between Magento and Shopify. Both are powerful eCommerce platforms and offer a truckload of features that make it easy to sell online. In that sense, both have played an instrumental part in democratising the ecommerce sector. They’ve lowered the entry barrier to eCommerce by a huge margin and empowered close to a million merchants around the world.

Shopify is a fantastic option if you want a hassle-free online selling experience. It’s easier to use, gets your online store up and running quicker, has a wide range of themes and apps, offers a way to avoid transaction costs charged by third-party payment processors and, this is important, takes care of your store’s hosting and bandwidth needs. It also costs lower to hire Shopify experts than Magento developers.

These factors make Shopify perfect for those who are starting out with eCommerce or have a small- to the medium-sized footprint. But that doesn’t mean Shopify cannot be used for large-scale eCommerce websites. You only have to look at the websites of brands like Budweiser, The Economist, New York Times Shop, Leesa Mattress, and Tesla Motors to understand what Shopify is capable of.

Having said that, Magento is a better option if you’re an enterprise and want to be fully in charge of your eCommerce platform. The flexibility it offers is second to none and a large open source community ensures there’s always an answer to any problem you’re facing. By hiring the right developers, you can make your Magento eCommerce store incredibly powerful while also retaining complete control over its customization and scalability.

So, that concludes our two-part series on what are the fundamental differences between Magento and Shopify, especially for up and coming merchants. If you’re still unsure about which is better for your purpose, we recommend trying out both for a while. This will help you come to grips with the pros and cons of each platform, thus helping you make the right choice.

But if you have made up your mind and want to start selling online as soon as possible, you’ll like to hear what our eCommerce experts have to say. Our team has developed and marketed eCommerce stores for merchants from around the world. Get in touch with us to know more about how you can mint millions with your eCommerce store, for years to come.