Shopify vs WooCommerce – Who Wins This Battle of Ecommerce Platforms? 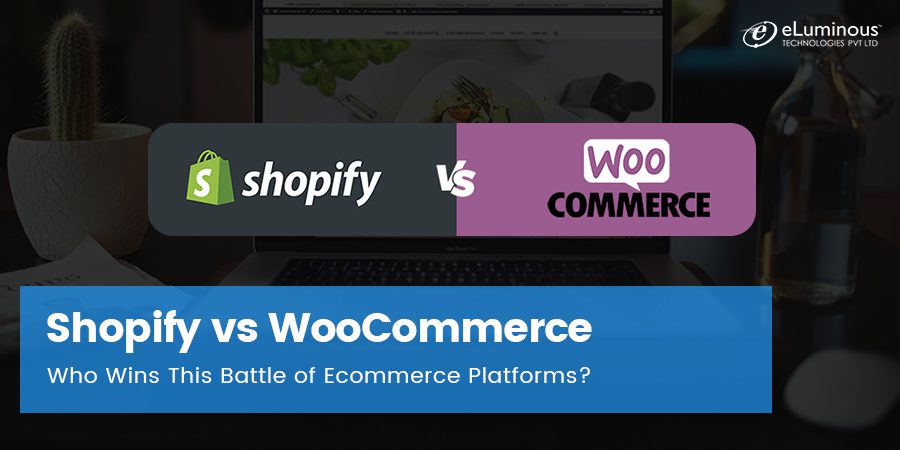 Consumers never had it so good. Millions of eCommerce stores are vying for their money, which means greater competition, lower prices, and better service. And a similar case could be made for merchants too.

After all, several eCommerce platforms are battling it out to get more and more merchants to sell through them. The resulting competition has driven down the cost of selling online while also making it easier for merchants worldwide.

Both Shopify and WooCommerce are great examples of this eCommerce platform revolution. They’ve broken down the entry barrier to eCommerce for smaller merchants and in the process, become the world’s most popular eCommerce platforms.

But which among the two is better for you? We attempt to answer that question in this Shopify vs WooCommerce comparison.

These two images present an interesting case. While it’s clear that WooCommerce is the world’s most popular eCommerce technology in 2019, Google’s search trends show that Shopify has racked up considerably more searches than WooCommerce in the last five years. And numbers back up these trends too as ModernMedia says the world’s fastest-growing online stores use Shopify.

So, if both are equally popular, how do you pick one for your eCommerce store?

Let’s get one thing clear – there’s no right or wrong choice here. Both are highly competent platforms and some merchants might find one more suited to their needs than the other. That’s also something we found out first-hand in the Magento vs Shopify comparison (Part 1, Part 2) we did a couple of months ago. Do read those posts if you’d like to know more about the eCommerce capabilities of Magento.

In this post, we compare Shopify and WooCommerce across a string of factors important for eCommerce. We also draw upon our own experience of developing both WooCommerce and Shopify eCommerce websites for clients around the world.

So, let’s dive straight in and find out which among Shopify and WooCommerce is the right eCommerce platform for you.

One of Shopify’s strongest points is the ease of use it offers. It’s a single-window platform where all basics like installation, hosting, updates, backup, and security of your online store are taken care of Shopify itself. It also helps that all Shopify websites are natively responsive, i.e. mobile-friendly.

All you need to do with Shopify is sign-up, select a store template design, add your products, and you’re done. And as the image below shows, you get a simple drag and drop builder for adding your products. If that still sounds too much to do, just hire a Shopify developer to build the store and set it up for you. Shopify developers are plentiful and affordable to boot.

On the flip side, you can’t customize your store beyond a point with Shopify. While add-ons from the Shopify marketplace do let you add several customizations and features to your store, this is a limitation you have to live with. 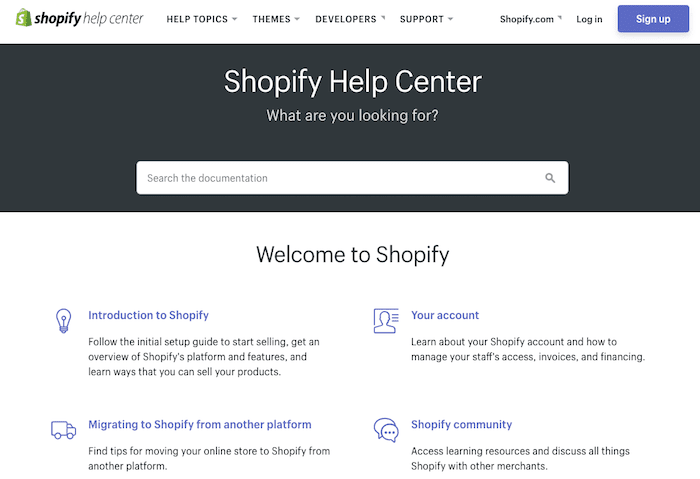 WooCommerce is a WordPress plugin – meaning it works as an added eCommerce layer over a normal WordPress website. That means the onus of building such a website is on you, as are the tasks of installing, hosting, maintaining, securing, and backing it up. And while you can choose from over 50,000 WordPress plugins to help you add those functionalities and more, the process does need you to put in some time and effort.

For adding products too WooCommerce is more complicated due to the absence of a native drag and drop builder. And while WordPress plugins like the DIVI Theme and Beaver Builder do offer a website builder, there’s no escaping the fact that setting up a WooCommerce store can be overwhelming for new users owing to its steeper learning curve. 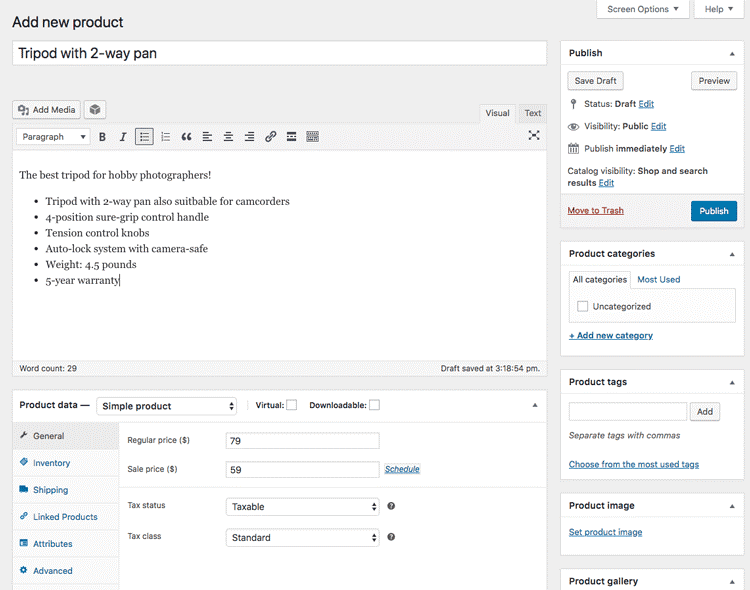 Who Wins – Shopify is a straightforward choice here. While it’s not as flexible as WooCommerce in terms of customization, it offers a much easier setup process and a decent choice of customization tools.

That’s just a peek into the swarm of features offered by Shopify. What’s commendable is that all of them are ‘built-in’ and available for all Shopify plans. This means you don’t need to fiddle around with add-ons to offer a full-fledged eCommerce experience to your consumers. And even if want to, you can easily integrate any extension yourself or hire a Shopify developer to do it. 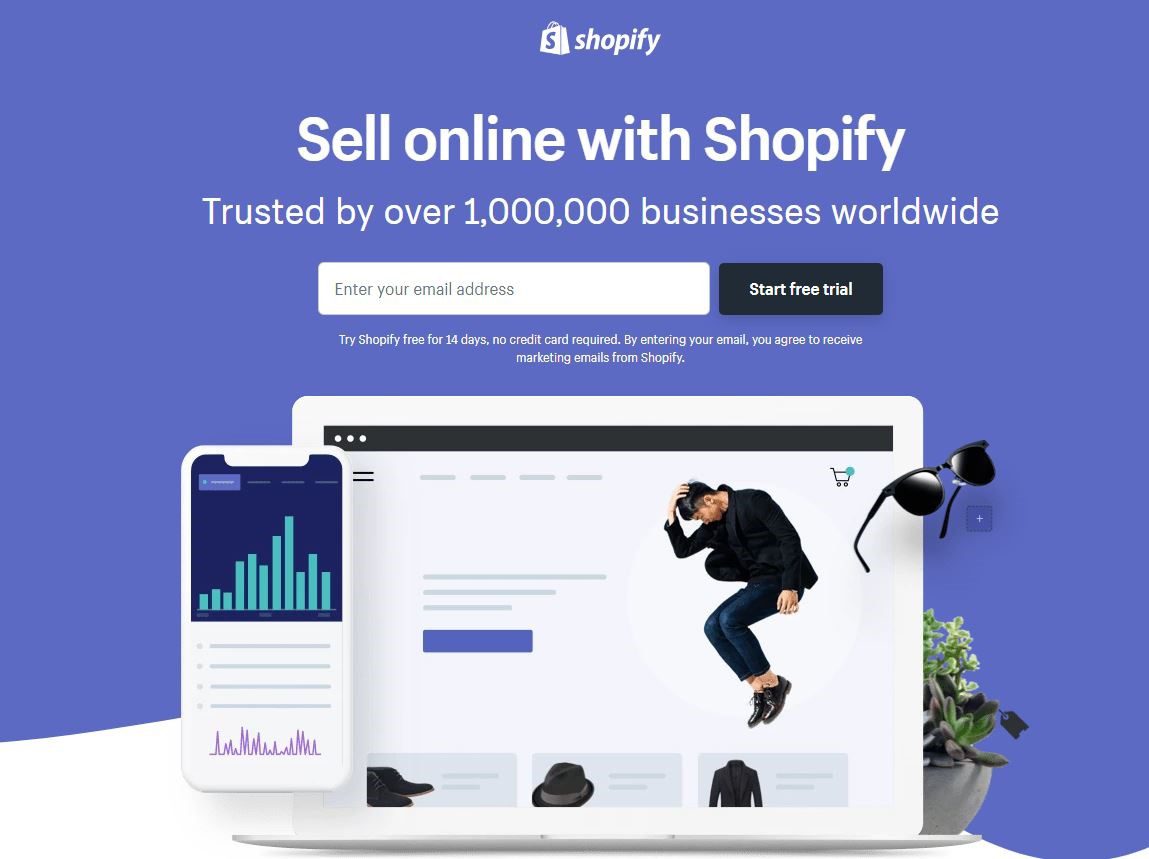 Source: Shopify
WooCommerce’s features are on par with Shopify’s in terms of offering a complete eCommerce experience. They include,

In fact, a WooCommerce store can do everything that a Shopify store does. But the catch lies in the fact that several advanced functionalities are not built natively into WooCommerce, unlike Shopify.

Instead, you have to sift through thousands of WooCommerce plugins (most of them admittedly superb) to configure your store just the way you want. Not only does this require time but also a fair bit of money as good plugins don’t come cheap. Who Wins – Although it’s a close call, the scale tilts ever so slightly in Shopify’s favour. Having essential features built-in and ready to use is always a better proposition than fiddling around with multiple plugins.

A variety of payment options is a must-have for eCommerce platforms in 2019. After all, there’s no worse way to lose a customer than not offering a payment option they prefer.

That said, both Shopify and WooCommerce perform well in this regard as they offer more than 100 payment gateways including PayPal, Stripe, Square, Amazon Pay, Authorize.Net, and credit/debit cards.

But the difference between the two lies in the transaction fee charged for using those payment gateways.

Shopify, for instance, charges 2% per transaction if you use a third-party payment gateway. There are two ways you can mitigate this,

WooCommerce, on the contrary, doesn’t charge any transaction fee. However, integrating a new payment provider with WooCommerce can be costly – Authorize.Net has a one-time integration charge of $79 apart from fixed monthly charges and a transaction fee. You can avoid such complications by accepting payments through Shopify Payments.

In both cases, however, you still foot the bill for bank charges and the fees levied by payment providers like PayPal. 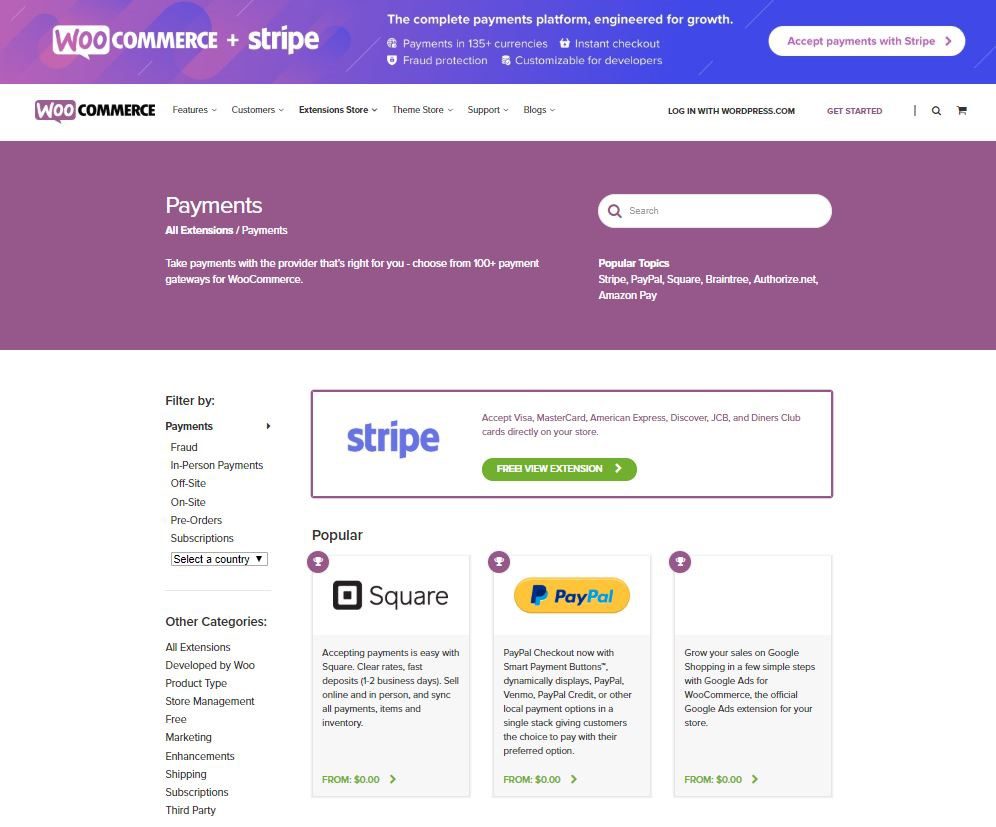 Who Wins – WooCommerce wins here as it doesn’t charge transaction fees. This makes it ideal for sellers dealing in larger volumes or those who prefer the flexibility of setting up their merchant accounts. But if you’re alright with using Shopify Payments, the playing field levels out and it’s a tie between the two.

Discoverability is key to succeeding in eCommerce. Unless consumers discover your store, your sales are going nowhere. This is where eCommerce SEO (Search Engine Optimization) comes in. Good SEO helps your store rank higher in search engine results for keywords that consumers might use to search for products you sell. Shopify’s App Store has lots of SEO and marketing add-ons that can help you optimize your store for search engines. But Shopify’s trump card lies in its inherent SEO-friendly structure.

WooCommerce, building upon the strengths of WordPress’s superb content capabilities, similarly lets you control every little aspect of your online store. From uploading images to adding title tags, Meta descriptions, social media integration, and blog posts, curating content is easy on WooCommerce. There are also a host of WooCommerce SEO plugins like Yoast to further make your store easily discoverable.

But with WooCommerce, you have to configure several important aspects of SEO on your own. For instance, you need to pay separately for an SSL certificate, buy quality hosting for fast and reliable performance, and devote a fair amount of time to optimize your store. 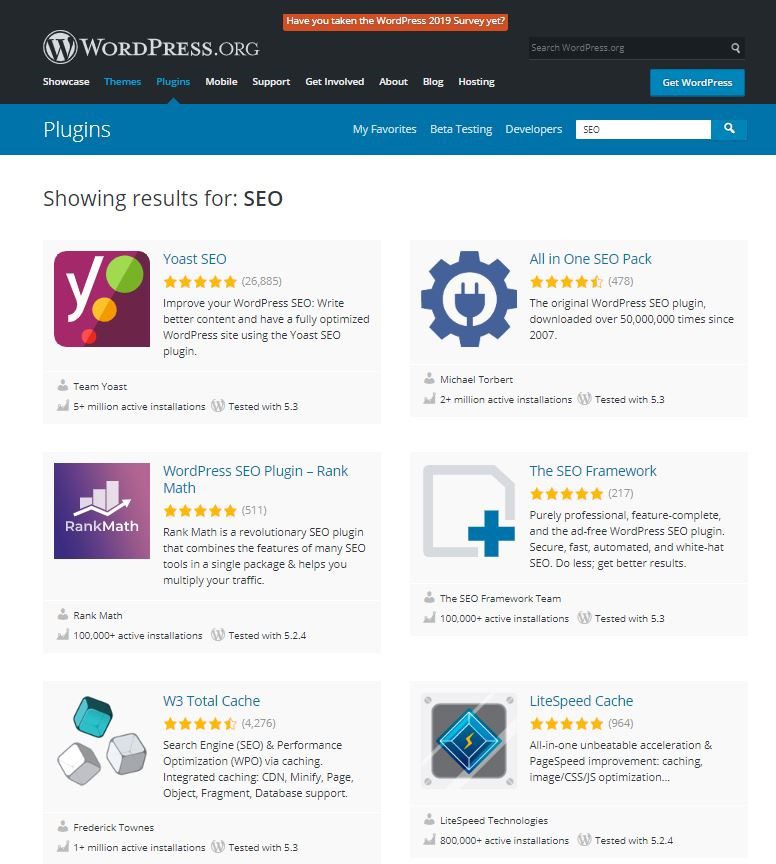 Who Wins – It’s too close to call here. Shopify is the way to go if you prefer an eCommerce platform that’s SEO-ready from the get-go. But if you don’t mind putting in some time, effort, and money into optimizing your store for SEO, WooCommerce’s greater customization, SEO plugins choice, and inherent content capabilities are hard to pass over.

Good customer support can be a lifesaver if you face problems while setting up or running your online store. And Shopify fares rather well here because of its tightly-controlled ecosystem.

It offers 24/7 support via phone, email, live chat, and even Twitter. And if you’re the kind that prefers to sort things out themselves, Shopify support offers plenty of how-to guides, documentation, tutorials, and community forums. 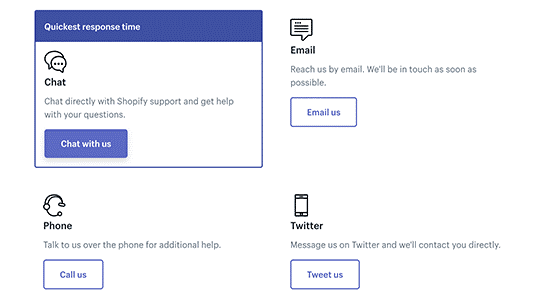 You can also hire a Shopify developer from Shopify’s list of experts to help you out with any aspect of your store. But beware that Shopify doesn’t offer official support for any third-party apps and themes that you might use.

WooCommerce offers all the advantages that come with being the world’s most popular eCommerce platform. There are tons of guides, documentations, tutorials, and community forums where you can seek help for any issue related to your WooCommerce store.

However, WooCommerce offers little by way of direct support – there’s no phone, live chat, or email option. All you can do is raise a ticket for a problem you’re facing. And since it’s a self-hosted platform, you need to contact your hosting provider in case of server issues. The same holds for WooCommerce add-ons and plugins, whose developers you must contact in case of problems. Source: WooCommerce Support
Who Wins – Shopify wins this, and it’s not even a contest!

Shopify plans start at $29 and top out at $299 per month. All plans are upgradeable to higher ones and include important features like domain name, web hosting, and an SSL certificate by default. 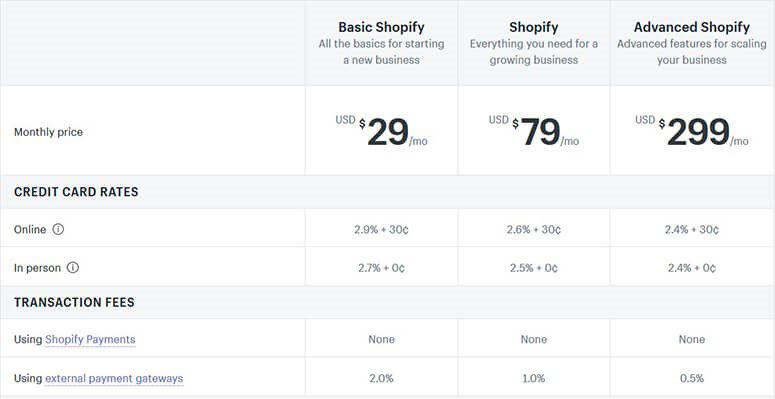 However, you need to pay for using third-party extensions with Shopify. And though you might not need those extensions at the beginning, they can be quite useful in scaling up your store and operations in the future.

And when talking about costs, you have to consider the fee for the payment gateways. As seen in the table above, the transaction fee reduces as you go for more premium Shopify plans.

WooCommerce is open-source and free to use. But you have to pay for everything else. This includes a domain name, website hosting service, and an SSL certificate. They are the bare minimum any online store needs to operate. 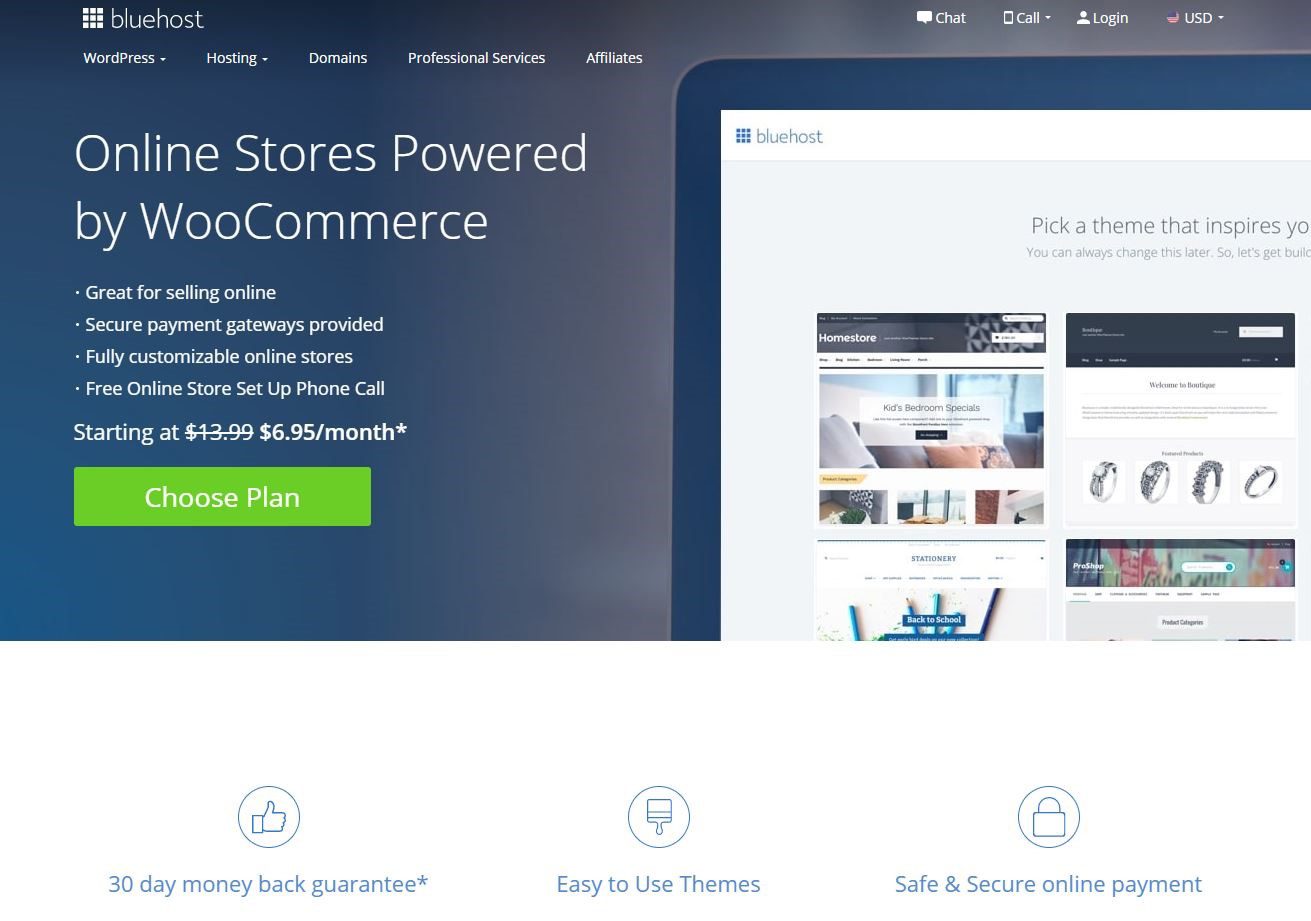 On the plus side, you can buy them for less than $15 per month, which is half the price of Shopify’s basic plan. There are also providers like BlueHost that offer specialized WooCommerce hosting for as low as $6.95 a month. And that price tag includes a domain name, a starter hosting package, and an SSL certificate.

It bears mentioning though that many of WooCommerce’s advanced plugins are costly, which means you have to pay more for adding premium features to your store.

Who Wins – WooCommerce edges out Shopify here. It’s cheaper to start your store with, offers loads of good quality and free plugins, lets you pay for only the tools that you want, and charges no transaction fee.

Shopify vs WooCommerce – Who Comes Out on Top

If you’ve read till here, it’s obvious there’s no clear winner among the two. So how do you choose between Shopify and WooCommerce?

Let’s make a case for each platform to simplify your decision further.

In the end, you can’t go wrong by choosing either platform. It’s also worth mentioning that it doesn’t cost much to hire a Shopify developer or WooCommerce expert to help set up your eCommerce store. Popularity has its advantages and easily available, affordable, and quality developer talent is one of them.

We hope this comparison answered your questions and helped you decide which among Shopify and WooCommerce is the better platform for your store.