Mobile Cloud Apps: The Next Frontier for Mobile App Development 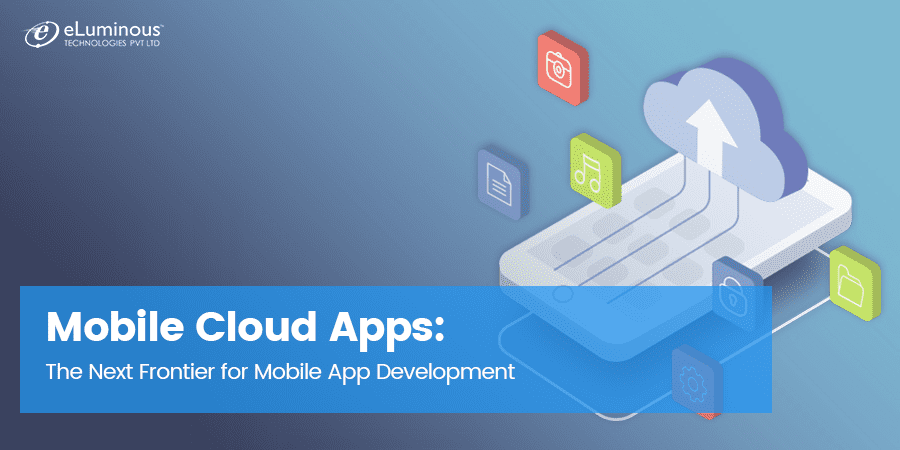 When was the last time you used an application that had to be downloaded, installed, and stored entirely on your computer? If you took even a couple of seconds to reflect on the question, it’s a testament to how deeply SaaS (Software as a Service) has made inroads into our work lives.

However, answering the same question for your mobile apps is much easier. That’s because though businesses have made the transition to cloud computing, the majority of them haven’t inducted cloud computing into their mobile app development process.

But with cloud computing marching ahead at a relentless pace – Cisco predicts cloud traffic would account for 95% of global data traffic by 2021 – most businesses would have no option but to harness the power of the cloud for their mobile apps.

In this post, we touch upon factors that make mobile cloud apps viable, the challenges in their adoption, and what should you consider before jumping into the mobile cloud computing fray.

What is Mobile Cloud Computing?

Users can access and use this application from their device through an internet connection, regardless of where they are located.

A mobile cloud app, as such, is simply a mobile application that is hosted on the cloud and can be accessed via an internet connection. Popular mobile cloud computing applications examples include Dropbox, Trello, and Amazon Cloud Player.

Mobile cloud computing enables users to do what they want without worrying about their device’s computing capacity as all the processing is carried out remotely on the cloud server.

This ensures that a variety of rich mobile applications can be executed on a diverse mobile devices and platforms.

Mobile cloud app development does away with the need to develop separate native apps for different platforms and devices. This is made possible as such mobile apps are stored on and run from the cloud, thus taking the platform (whether Android or iOS) and device (across brands with different configurations) out of the equation.

A derivative benefit of the previous point is a lower cost of development and maintenance. The cost to hire dedicated developer for native apps is higher as you need to develop separately for each platform.

But with cloud-based mobile apps, you can use one codebase for multiple platforms. This also reduces your post-launch app maintenance costs, which for native apps can amount to 20% of the total development cost.

Time-efficiency is a crucial attribute as it determines your ‘Go-to-Market’ time, a metric that can either make or break the success of your app. Even if you are building an app for internal purposes, rolling it out quickly can help you achieve measurable productivity gains almost immediately.

With cloud-based mobile app development, all the basic inputs for your app such as integration, back-end connection, security, and APIs are already set up. This lets your developers hit the ground running and focus on building better apps quickly.

Cloud technology and scalability are two sides of the same coin, making it easier to scale a cloud-based mobile application. For instance, your users don’t need to update their apps every time you push a new change or feature addition.

While this can be achieved for native apps too, the cost and complexity tend to be higher than that for mobile cloud apps.

A cloud-based mobile app is stored on a remote cloud server. All your user needs to access the app is an internet connection. This eliminates the need to download and install an app on the mobile device, thus freeing up storage space. As with web-based apps, cloud apps too run from a browser.

The importance of data integrity and recovery for businesses and individuals cannot be understated in today’s day and age. However, this is a worry that ceases to exist with cloud-based mobile apps.

That’s because the app’s data is stored on multiple servers and is backed up regularly which makes data retrieval after a glitch or breach a straightforward affair.

Read more: Flutter vs React Native 2020: Which Cross-Platform Mobile Framework Is Right for You?

Despite its impressive advantages, cloud-centric mobile app development has its share of challenges. That said, it’s important to note that these are unlikely to remain deal-breakers in the long run as mobile cloud computing grows.

In contrast to its superlative data recovery capabilities, the data security aspect of cloud-based apps is still evolving. Since all of the user’s data is processed and stored on the cloud server, it becomes doubly important to secure it via enhanced encryption, reverse proxies, SSL, and improved user authentication and access protocols.

But as mentioned previously, addressing these concerns is more a matter of ‘when’ and not ‘if’.

While cloud-based mobile apps do help overcome the issue of mobile device and platform fragmentation, they might be hampered by fragmentation of a different kind.

Since different cloud systems do not always communicate freely with each other, developers might run into compatibility issues while trying out components from different services while building an app.

Your app’s performance, especially if it’s a consumer one, has a major say in its success and acceptability. For instance, it’s proven that a custom UI has to load within 3 seconds to achieve optimal conversion rates.

The ability of your cloud-based app to do so might be restricted by slower internet speeds and high latency, thus lowering overall performance.

Things to Consider Before Going for Cloud-based Mobile App Development

Now that we’ve looked at the pros and cons of mobile cloud apps, let’s turn to what you need to consider before choosing cloud-based mobile app development.

If you’ve developed only native apps, building cloud-based apps might not be a simple transition due to the differences between the two.

For instance, building a web-based app on the cloud might require a greater grasp of database structures compared to developing a non-cloud app.

In other words, there’s a degree of learning curve associated with moving to cloud app development from native app development. This is unlikely to be an issue as the adoption of cloud-based apps rises, thus giving rise to a sizable resource pool.

But if you want to get on the cloud bandwagon early but find the learning curve unviable, hire dedicated developer instead.

2) Cloud is Not Always the Right Answer

There are several scenarios where the cloud isn’t a feasible option. For example, if the systems you plan to integrate the app with aren’t easy to access and replicate, developing and testing that app on the cloud will be overly complex and difficult.

This is why many businesses prefer not to use cloud-based development for high-end apps that require strict security or rely on projects running legacy code.

Because of its relative newness, cloud-based app development is slightly handicapped by the paucity of quality documentation that can help developers quickly find their way around cloud app development, tools, and resources.

Every technology undergoes rapid and seismic changes in its infancy and that holds for cloud app development as well. This means that developers will constantly need to update themselves with the latest releases, features, and breakthroughs.

While this is easier to do at an individual or even team level, businesses might find the changes a tad harder to keep up with. The only workaround to this is partnering with expert cloud development service providers.

Cloud Computing and Mobile App Development: The Way of the Future

On the whole, the dice is loaded more in favour of cloud mobile app development rather than against it. Yes, there are teething issues in the form of security, interoperability, and resource availability.

But they are more than made up for by the inherent advantages of mobile cloud apps such as multi-platform compatibility, scalability, cost and time effectiveness, and overall greater agility.

If you’re contemplating a move to the cloud for your new or existing mobile app project, do get in touch. As a mobile app development company in India for over a decade, we’ve built, launched, and maintained over 500 business and consumer mobile apps.

And if you liked this post, do subscribe to get informative posts about web and mobile development, data analytics, and eCommerce delivered to your inbox. Thank you for reading!