Have you ever dealt with a situation wherein you come up with a new feature or bugfix for your software, which was then tested by your QA team, before being pushed to the codebase, only for it to break something else, and being finally withdrawn?

As an IT business solution provider, we see this sequence of events playing out frequently, leading to much frustration among development teams and cost escalations for businesses. This is also exactly the problem that is solved to a large extent by test-driven development, popularly known as TDD.

What is test-driven development, how to implement it, why and when to use it, and what are its pros and cons? Read on to know the answers.

What is Test-driven Development?

“TDD is what gets us the closest we can get to proving our code does what we want it to do all of the time.” – Peter Morlion, Red Star IT

Test-driven development is an iterative process that helps developers or an app development company to produce robust code in a faster way. How does it do that? Well, in TDD, you write the unit test for the code before writing the code itself. This test checks for a result that you’d want from your implementation code. Logically, such a test will fail at the beginning as you haven’t yet written the implementation code to achieve your intended result.

Next up, you write the implementation code that passes the unit test you wrote previously. Once it passes the test, you look for areas of your implementation code and test that can be improved without breaking the latter. You need to repeat this process for the rest of your code and until you have an adequate number of tests that cover all probable results.

That, in essence, is what test-driven development is all about. In a later section, we go into details of each step involved in TDD.

Why Test-driven Development is Used?

TDD is widely used and there’s ample publicly-available evidence to back up its effectiveness. As for the latter, TDD drives down the number of bugs in your production code and enhances the code’s quality. This, in turn, makes your code easier to understand and maintain. Here’s a test-driven development example where the method helped reduce bugs by 50% in a legacy codebase.

If you prefer a more formal and peer-reviewed evaluation of test-driven development, check out this study that stretched over five years and showed that if you hire dedicated resources who are new to TDD, they’re likely to produce higher quality software with TDD than the industry average.

How to Do Test-driven Development?

Understanding the test-driven development framework and how to implement it becomes easier if we break down the process into five smaller steps. 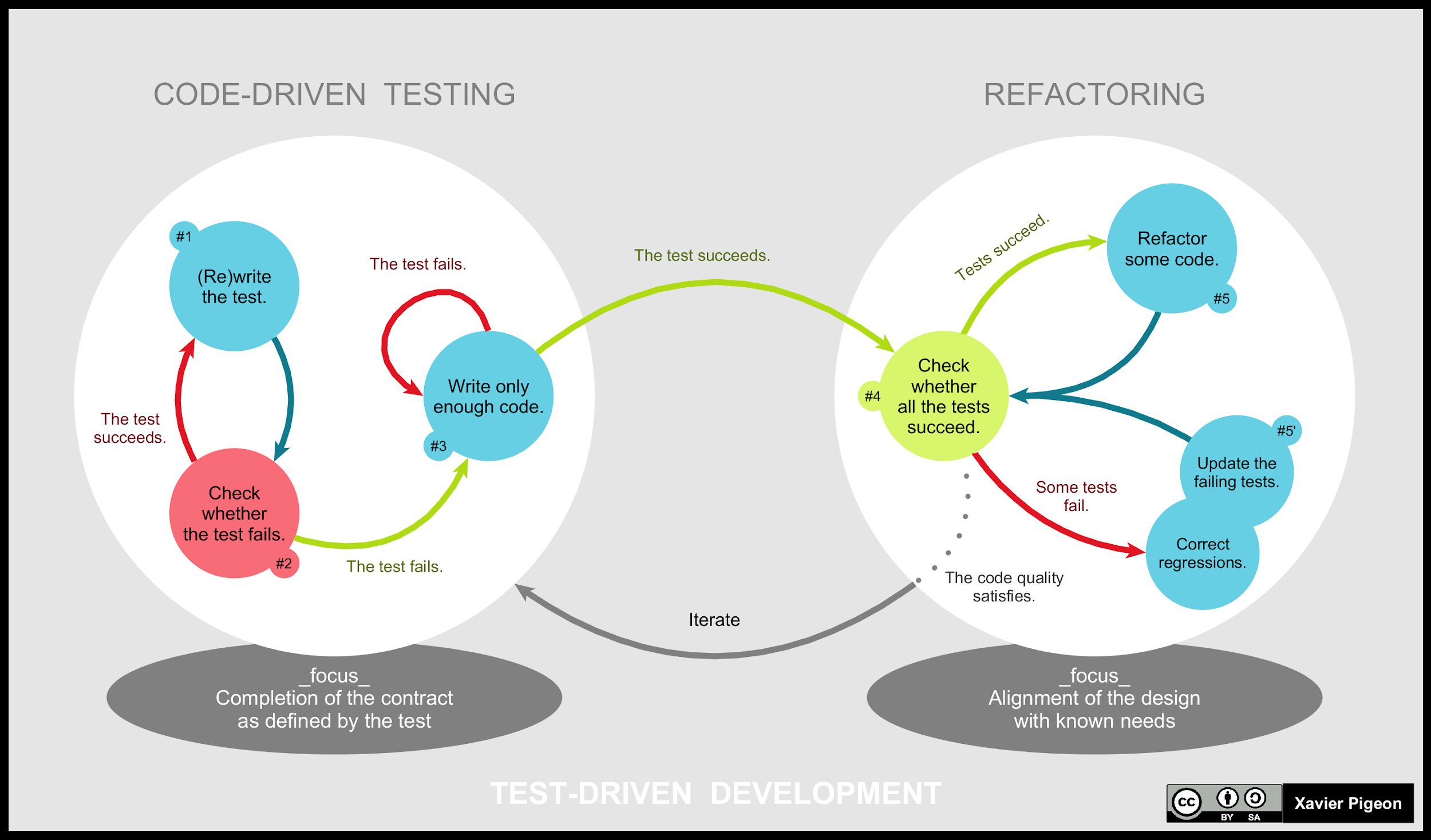 As previously stated, the first step in the test-driven development process is to write a test case whenever you want to add a new feature to an existing or new system. A prerequisite for writing an effective test case is that you need to know and understand the expected outcome clearly. The test case, as such, must be as simple and brief as possible.

Let’s look at an example to illustrate this concept. Say, you want to add an inquiry form in your website. An off-the-cuff way to do this is to write a single test case that checks for all necessary validations and sends emails to the subscriber/customer as well as the website owner.

Under the TDD approach, however, you need to write the smallest possible test case that is necessary to build a newly-developed feature. So, in this example, you can write a test case just to check the validity of the phone number. You can write another separate test case to check if the email has been sent to the subscriber/customer.

TDD, in this way, is all about breaking down the software development process into smaller independent ones where you clearly know the expected outcome of each before writing the test.

2) Confirm if the Test Case Fails

Once you’ve written a test case, you need to confirm if it fails. The failure indicates the newly-written test will not pass until you write the code for a new feature or bugfix. The new test, however, should fail for the expected reason. This sequence of events, if followed correctly, increased the developer’s confidence in the written test case.

3) Write the Code to Pass the Written Test

Now, all you need to do is write the code to help pass the newly-written test case. Ensure that you do not write any extra code beyond the scope of the test case. The key is to write code that will pass the test, and no more. Although this approach might lead to less-than-perfect code, it’s a trade-off that is addressed further down the TDD process.

Run your tests and confirm if all your test cases pass and do not break or degrade any functionality in your system in the process. If the test fails, modify your code until the test is passed.

This step addresses the issue mentioned at the end of point no. 3. Refactoring helps with regular cleaning and checking of your code, even after it has passed all your test cases. This process helps you make the code better by eliminating errors such as code duplication, incorrect function/class names, and not placing the code where it’s logically supposed to be.

At the refactoring stage, you need to make your code simpler and more systematic. At the same time, you should also frequently re-run the old test cases to ensure the new addition is not introducing new bugs or breaking the system itself.

You must repeat all the preceding steps in their original order every time you add a new feature. For better and faster results, make your test cases as small as possible and work your way up to the fully-finished feature. The process also holds in case of bugfixes or when you’re working with any legacy system.

What Are the Pros and Cons of Test-driven Development?

Benefits of test-driven development extend from an individual developer level to an organizational level. As such, it can positively impact the latter’s bottom line when implemented correctly.

1) Reduces Overall Development Time – Although writing the test case before the implementation code sounds counterproductive because of the additional coding work, the continuous and instant feedback loop of TDD significantly reduces the number of bugs in your code. This drastically cuts down the efforts required to maintain, enhance, and extend the project after it’s deployed.

2) Reduces Debugging Time – You spend almost no time debugging in TDD as you’ve fixed most of the bugs in the development stage itself thanks to the instantaneous feedback system. For instance, if you’re an app development company, this has a positive impact on your go-to-market time and gives your new product a much-needed competitive edge.

3) Gives Due Importance to User Experience – Apart from the basic validation of correctness, test-driven development also drives the underlying design of your software product. Since the focus is on test cases first, TDD forces your dedicated development team to think how your intended user interacts with functionality in your software.

As a result, the team is required to focus on the interface before the implementation. This advantage of test-driven development is complementary to design by contract, as it approaches code through test cases instead of mathematical assertions or preconceptions.

That said, there are certain problems with test-driven development you need to be aware of before using it for your project.

1) More Time Consuming – As mentioned in the first pro, test-driven development requires additional development time as you need to write test cases for every feature in your system. This aspect also makes it unsuitable for PoC (Proof of Concept) products, where you have to demonstrate the viability of an idea quickly and at low cost.

2) Difficult to Apply in All Cases – TDD works brilliantly when you know all the outcomes, which is the case with smaller projects or individual features of larger projects. However, it’s not suitable for large, complex, and evolving projects as you’re not completely aware of all the functionalities and don’t have adequate understanding.

3) Can Cause Tunnel Vision Development – The excessive focus on breaking down the development process into the smallest possible test case can push your larger business goals to the background. This is why pre-development consultation before you hire dedicated resources is so important.

Read more: What is Observer Design Pattern: A Brief Guide with a Case Study

If you’re wondering if and when to use test-driven development in your project, a simple thumb rule is to see if you’re using a complex algorithm and if you have a clear outline of your software project. TDD can help you tackle the former by breaking down your project into smaller sections while the latter ensures TDD doesn’t end up inflating your project’s complexity and timeline unnecessarily.

If you still have questions about using test-driven development for your project, drop us a line and have our dedicated development team get back to you. As an IT sbusiness solution provider for almost 20 years, we’ve used TDD extensively to build robust, maintainable, extensible, and scalable software products for businesses in Asia, Africa, Europe, and North America.

Thank you for reading! If you liked this post, subscribe to our blog and get informative posts about web and mobile development, data analytics, business intelligence, and eCommerce delivered to your inbox.