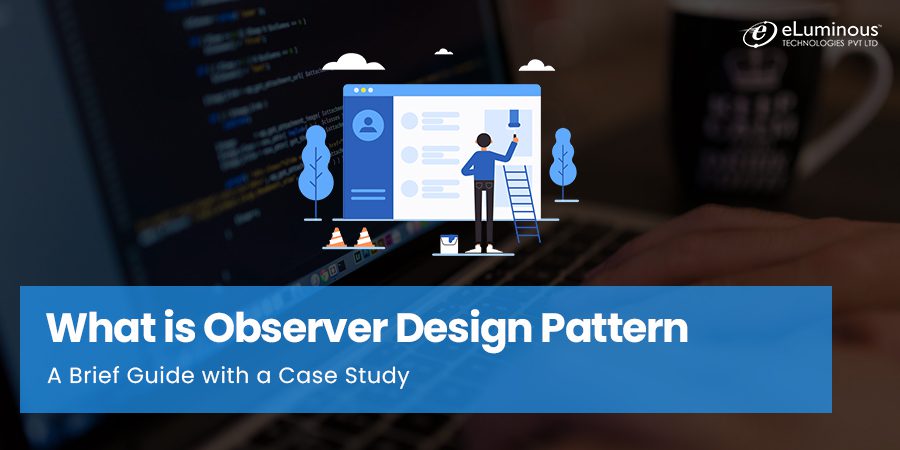 What is Observer Design Pattern?

Observer pattern is classified under the behavioural type of software design patterns. Behavioural patterns deal with the communication between different objects of the classes.
The observer design pattern, as such, enables one object (also called an observable or subject) to communicate a change in its state to other objects (also called an observer or object) that are observing it. In other words, the subject alerts the objects observing it every time it changes.
Observer pattern ensures a clear separation between the subject and the observer objects. It lets you define the boundaries between various modules, which improves the maintainability and reusability of your software.
In this way, the observer pattern lets you notify other objects about the change in the subject’s state while ensuring a high level of collaboration, ease of use, and loose coupling.

Let’s understand this with a simple real-world analogy. Say, you found a great website that sums up all the important news of the day via a newsletter. You liked the content and subscribe to this newsletter. You continue to enjoy the daily newsletters, until the day you don’t because of any number of reasons. So, you decide to withdraw your subscription to the website. Bear in mind that there are probably thousands of people subscribing or unsubscribing at the same time as you.
In software development, the news website and its users (i.e. you) constitute an observer design pattern. While the website is the subject here, the subscribers are the observers. So, every time the subject’s state changes, it broadcasts the same to its observers, who then go onto update themselves and display those changes.

Let’s take a real-life use case to understand how observer design pattern makes it easier to create a system where you can get a set of objects interested in the changes that are happening to another object.

In this case, the observer design pattern is used to design a publisher and subscriber pattern, similar to the newsletter example we saw previously. Here, the ShareMarket is the object whose state the other object, ShareHolder, is interested in. As such, the former is the publisher and the latter, the subscriber.
The publisher will notify all its subscribers whenever its state changes. The subscriber(s) can then choose what to do with that information, i.e. they can either continue with the subscription or unsubscribe once their stated purpose is achieved.
This arrangement is perfectly illustrated by the below image,

Note – In the observer design pattern, all the subscribers have to implement the same interface and the publisher must communicate via that interface only.

As mentioned previously, the ShareHolder is the subscriber who will be notified by the publisher (ShareMarket) when the share price drops by $10. Once the subscriber achieves their intended goal of selling a share, they can unsubscribe from the publisher to avoid receiving unwanted notifications.

Here, the attach() function allows us to register or link an observer (subscriber) to a subject (publisher). Similarly, detach() is used to unregister or unlink a publisher and a disinterested observer.
The notify() method communicates a change in state to all subscribed observers, following which the update() is called on each observer.
A Subject/Publisher Implementation

Here, we define an attach() method so that an observer instance is accepted as an argument. And as we saw previously, the method lets you associate the observer with the observable, i.e. subject. Similarly, the detach() method is used to detach the two.
The notify() method loops through the linked list, acquires the subscriber’s key, uses it to locate the said observer, and then calls update() on that observer.
Note – The linked list is arranged in a way so that the highest priority observer gets alerted first.
The setEvent() function accepts the argument of an event you want to broadcast before calling notify(), which then calls update() in all observer objects.
An Observer/Subscriber Implementation

Here’s an observer pattern use case where you broadcast an event to your team via Zoom. Now, some of your team members are on vacation and only reachable through email. Additionally, you also want a live feed of this broadcast on the main screen in your office. This is how you can implement all of that with observer design pattern:

What are the Pros and Cons of Observer Design Pattern?

i) Observable (subject) and observers (objects) are loosely coupled. This lets you reuse the two independently of each other. For instance, you can make as many changes as you want to the observers without having to modify too many things.

ii) Makes your code maintainable, reusable, scalable and the development process faster and cheaper, especially if you hire dedicated resources for the task.

i) If observer is wrongly implemented, it can increase complexity and cause unintended performance issues.

ii) It can lead to memory leaks if the observer fails to detach from the subject when it no longer wants to receive notifications, aka, the Lapsed Listener Problem.

When to Use Observer Design Pattern?

Your dedicated development team can consider using observer design pattern when,
i) the change in state of one object must be reflected in the state of another object while keeping the two objects loosely coupled

ii) the code needs to be enhanced in the future by adding new observers while keeping changes to the minimum.

“Observer pattern defines a one-to-many dependency between objects so that when one object changes state, all of its dependents are notified and updated automatically” – Gang of Four
This aspect of observer design pattern makes it an ideal choice for use in eCommerce stores, news feeds, live chats, social media (now you know how notifications work on Twitter, Facebook, and YouTube). It provides an organized and proven design for applications where several objects are dependent on the state of one object.

As an IT business solution provider for almost 20 years, we’ve used observer design patterns to build robust and scalable software quickly. This has helped our clients save money and time while effectively responding to dynamic market conditions and user preferences. If your business is faced with a similar challenge, get in touch with our dedicated development team now.
Thank you for reading! If you liked this post, subscribe to our blog and get informative posts delivered straight to your inbox. We cover diverse topics on our blog including web and mobile development, data analytics, business intelligence, and eCommerce.