6 Superb Apps Made with Flutter 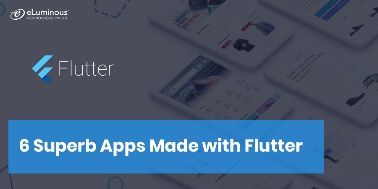 Google launched Flutter as an alternative to React Native back in 2017. Although mobile app developers and business owners warmed up to Flutter steadily throughout 2018, the cross-platform mobile app development framework only took off in 2019.

This chart in Stack Overflow’s annual developer survey shows the extent to which Flutter outpaced its chief rivals, viz. React Native and Xamarin, in 2019 when it comes to popularity. 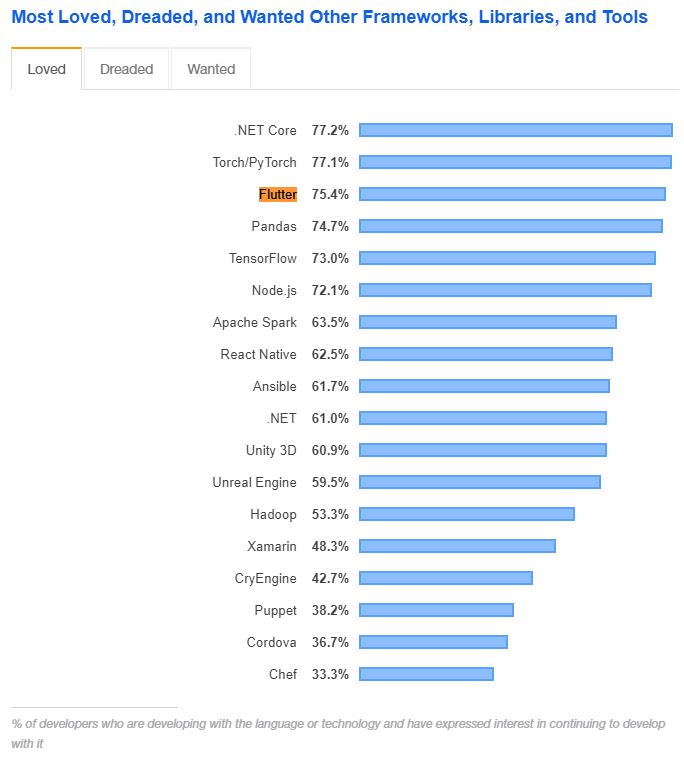 And understandably so as Flutter helps developers create different UIs for platforms like Android and iOS while using a single codebase. This helps save time and makes the development process more efficient.

Coincidentally, those are also the exact reasons why businesses, both upstarts and established brands, have taken to Flutter app development like a duck to water. After all, it’s hard to argue against the positive impact Flutter has on any business’s bottom line due to its advantages.

The companies and apps we’ve collated here have all benefited from one or more of these Flutter advantages, which include reduced time to market, lower development costs, and greater customer-centricity.

So, without further ado, let’s look at 6 superb apps made using the Flutter mobile development framework.

Flutter significantly reduced the time we need to develop for a new feature from 1 month down to 2 weeks – Bruce Chen, Senior Development Engineer, Alibaba

Chinese giant Alibaba is among the top three largest eCommerce companies in the world. Propelling the platform’s huge size and business volumes is a user base of almost 800 million people, which is twice the size of the US’s entire population. 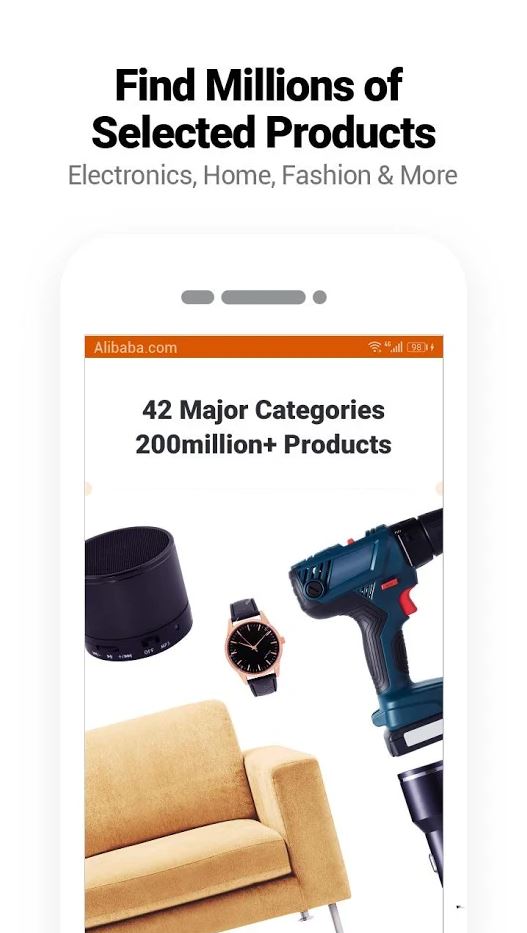 Despite operating at a huge scale, Alibaba has managed to clock impressive growth in the worldwide B2B wholesale eCommerce market. A major part of the credit for that growth goes to Alibaba’s mobile app made with Flutter.

The framework helped the company reduce development times by up to 50%. What Alibaba’s example also proves is that Flutter is perfectly capable of handling eCommerce transactions on a massive scale.

Getting started with Flutter was truly awesome. The huge power and productivity you get with instant stateful Hot Reload was mind-blowing – Jacob Kristensen, Co-Founder, Reflectly

The ability to make changes to the code and see them reflected instantly isn’t the only thing that Jacob found useful about Flutter app development. The lifestyle app he co-founded, Reflectly, is powered by AI that helps users create and maintain a personal journal. 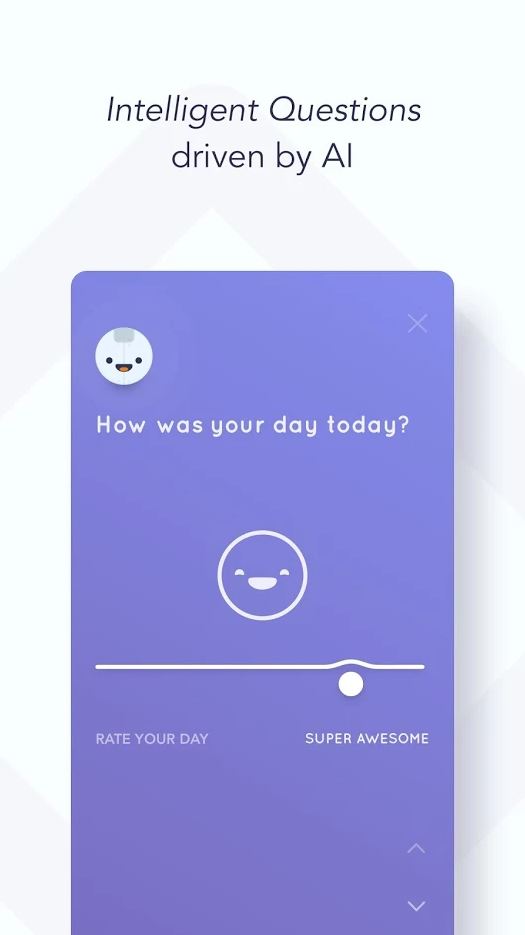 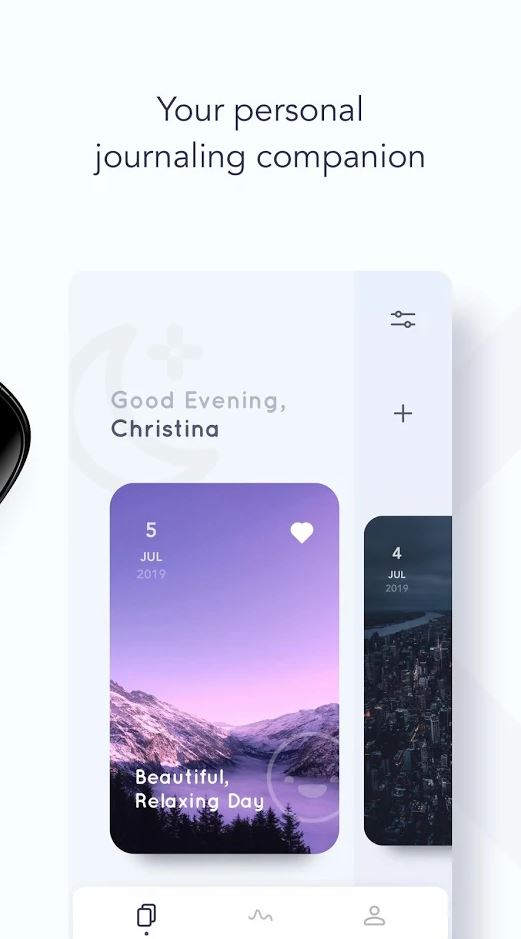 The app’s AI acts as a kind of writing prompt by coming up with new thoughtful questions for users to answer every day. This way, Reflectly helps users reflect on their thoughts and structure them through journaling – a sort of intelligent diary if you will. Further adding to the app’s intelligent credentials is a detailed dashboard with stats and insights.

The success of Reflectly shows that apps built with Flutter can effectively harness the power of AI, ML, and NLP. And with AI-based customer service expected to become the norm going forward, businesses would be served well by choosing Flutter.

With flutter, the iOS version of our app was up and running in 2 days (as opposed to the usual 2-3 weeks), which was really amazing – Amit Sharma, CTO, Dream 11

Dream11 is the largest sports fantasy platform in India with a user base of over 70 million playing fantasy cricket, football, NBA, and hockey. In addition to serving a large user base, the Dream 11 app also handles hundreds of thousands of transactions each day, which calls for top-class security. 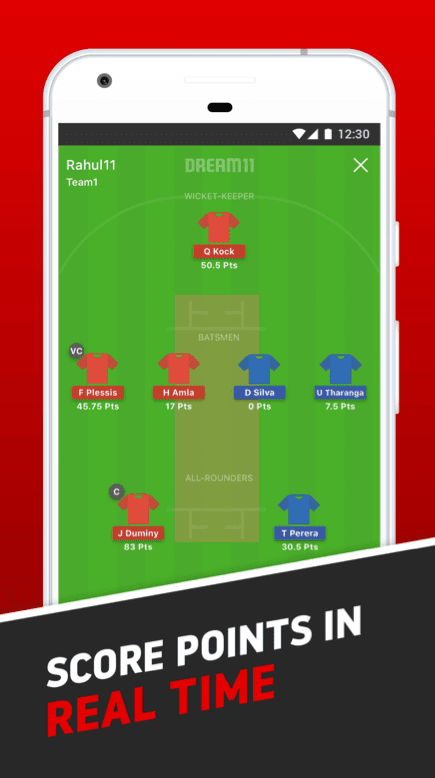 To add to that, fantasy sports is a very dynamic sector with rapidly-changing trends and user preferences. Businesses into fantasy sports need to be on their toes when it comes to developing new apps/features and getting them ready for the market quickly.

The Flutter framework served these purposes perfectly for Dream 11. Its intuitive language made collaboration easier for the company’s young development team, which in turn helped Dream 11 efficiently scale from just 300,000 to over 50 million users within 5 years.

We knew that this app needed to be rock solid both in terms of performance and visual fidelity, and really represent the amazing experience that the Hamilton show itself provides – Jessica Wagner, Manager, Posse (Hamilton)

The official app of the popular Broadway musical, Hamilton, is made with Flutter. The app offers several features like exclusive news, daily lotteries, trivia games, videos, merchandise store – all wrapped in a user interface whose visual elements stay faithful to the musical’s vivid imagery. 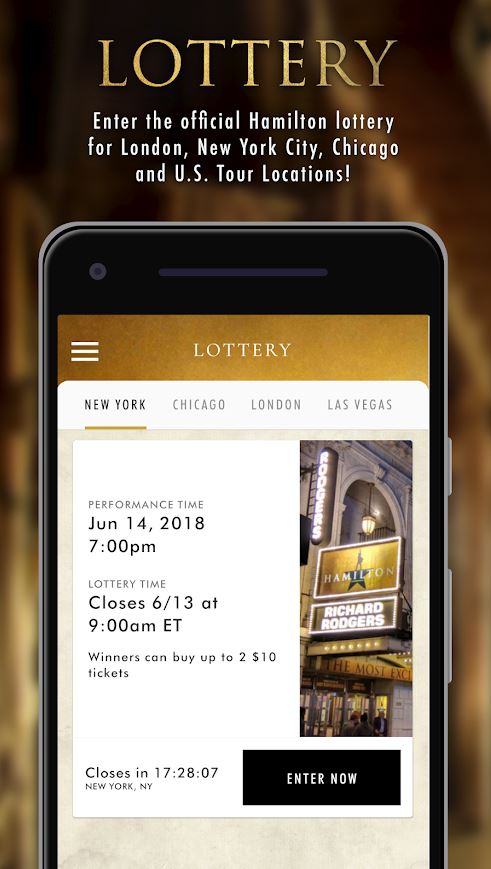 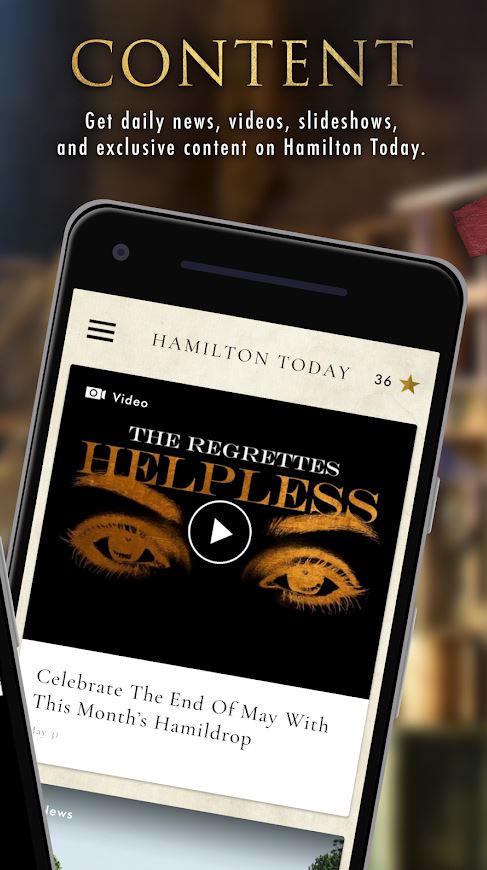 Posse, the Flutter app developer responsible for the Hamilton app, chose the framework for its cross-platform ability, seamless scaling, fast development times, and the freedom to create a custom branded native design that was consistent across Android and iOS.

The market too repaid the development team’s faith in Flutter by making a success out of the Hamilton app. Till date, the app has over a million monthly installs and mid-to-high 4.X ratings on both Google’s Play and Apple’s App Store.

Topline is a popular music recording app that lets artists record their song ideas, even when they are on the move. First showcased at Google I/O 2018, Topline gained prominence when the music industry took note of it because of distribution platforms like Ditto and Spinnup. The app also won plaudits in the mobile app industry as it was adjudged ‘UX of the Year’ and ‘Music App of the Year’ at the 2018 UK App Awards.

At the beginning, the decision to go with Flutter was a gamble, concedes Pawel. That’s because the Flutter SDK was still not stable, which brought to surface a host of issues that arise when working with new technology. 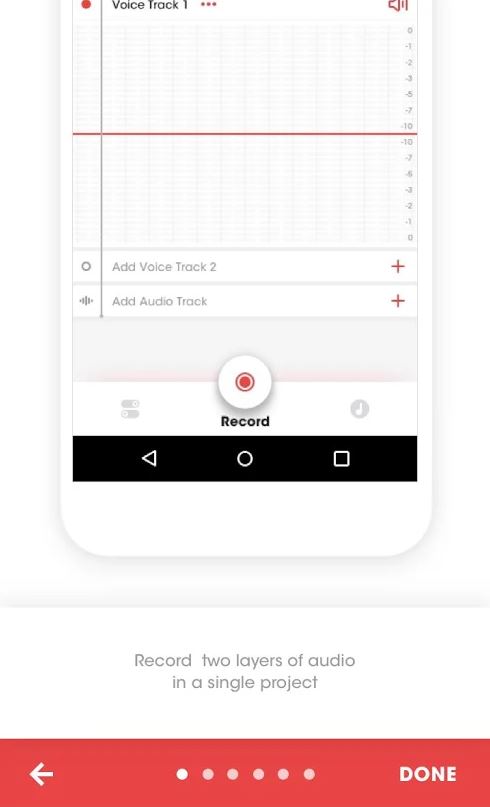 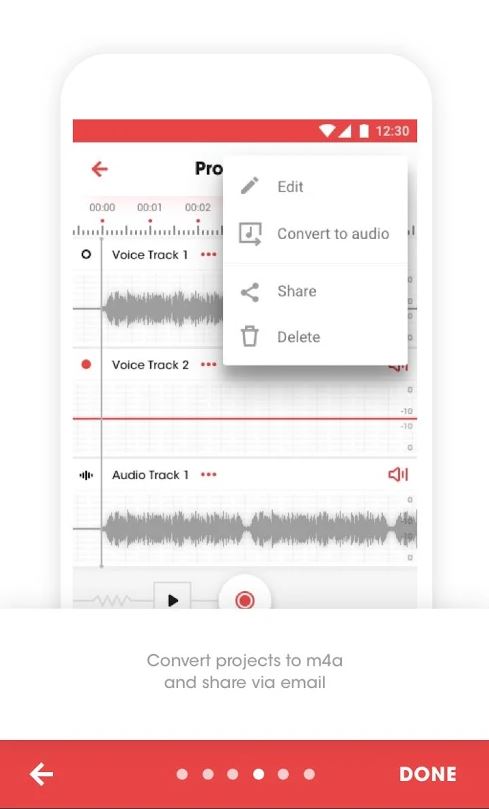 But to say that the gamble paid off would be an understatement. From the wide range of customizable and beautiful widgets to features like hot reload – which helped Topline’s development team spot and fix issues in real-time – choosing the Flutter framework helped Topline deliver a visually appealing, user-friendly, and feature-rich app in double-quick time.

Perhaps there’s no greater endorsement of Flutter’s abilities than Google itself choosing the framework to build its money-spinning ad manager app. The Google Ad app helps users keep track of and manage their various ad campaigns smoothly while on the go. 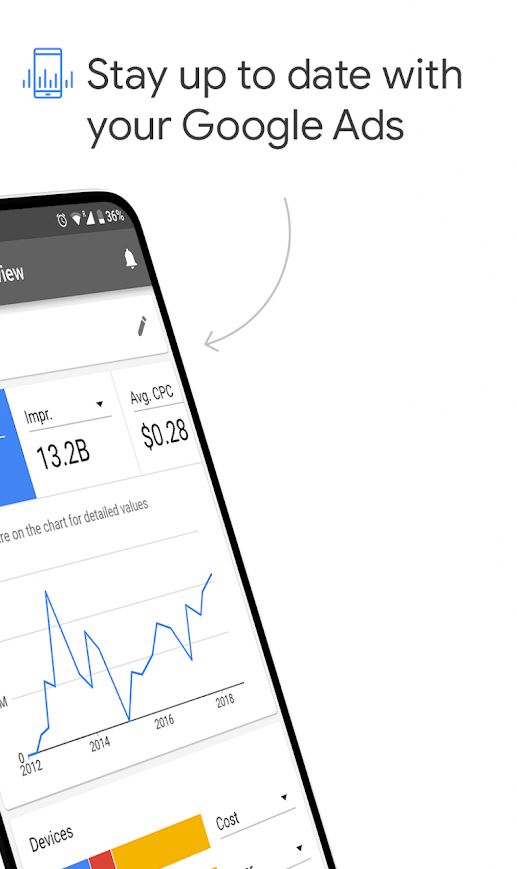 Some essential things one can do on the app include viewing campaign statistics, receiving real-time alerts/notifications, updating budgets and bids, getting automated suggestions to improve their ad campaigns, and even calling a Google expert for campaign optimization.

Google Ads is constantly updated with new stats and features to help users get more bang for their buck in the highly competitive world of paid advertising. And despite its stats-heavy nature, the app is remarkably user-friendly because of the intuitive UI and widgets. Flutter has been instrumental in Google Ads’ success in both those aspects.

Why Flutter is Good for You

The list of apps made with Flutter is getting longer by the day. As evident from the names featured above, Flutter is gaining traction not only among enterprises but also young startups that prefer the framework’s flexibility and resource efficiency. Flutter’s popularity is only set to increase further in the immediate future as its libraries and tools get better, which will further reduce development times/cost while helping create even more awesome apps.

That makes Flutter app development an excellent choice if you have a new business idea or want to give a fresh lease of life to an existing app. Its versatility also makes it suitable for industries as diverse as education, fashion, entertainment, lifestyle, finance, business, health, and fitness.

You can also bounce off your idea with our Flutter app developer to understand the cost, time, and business implications involved in either building a new app altogether or recreating it with Flutter.

So, did we miss out on any popular and innovative Flutter app in this list? What are your favorite apps made with Flutter? Do share your views in the comments below.