Have you ever thrown up your hands in frustration when after a hectic day of travel, you find your phone’s charger is incompatible with the one in your hotel room?

If you have, we know the feeling as software developers too encounter such issues when developing software, whereby two objects with different interfaces in the code need to interact with each other.

The challenge in both cases is to find a solution that costs lower than, i) buying a new compatible phone charger and ii) reworking the code because the changes broke something.

The answer in both cases is an adapter, one is physical while the other one is virtual.

What is Adapter Design Pattern?

Adapter design pattern belongs to the structural category of software design patterns. Structural design patterns deal with the composition of classes and objects in code. The adapter pattern, as such, presents a way to convert an object into another object that the client expects.

It does this by adapting one object to another object. This allows for objects with different interfaces to work together seamlessly. Like its physical counterpart, the software adapter pattern doesn’t add any extra functionality to the interfaces of the objects in question (a travel adapter charger doesn’t physically alter either the phone’s charging point or the plug point). 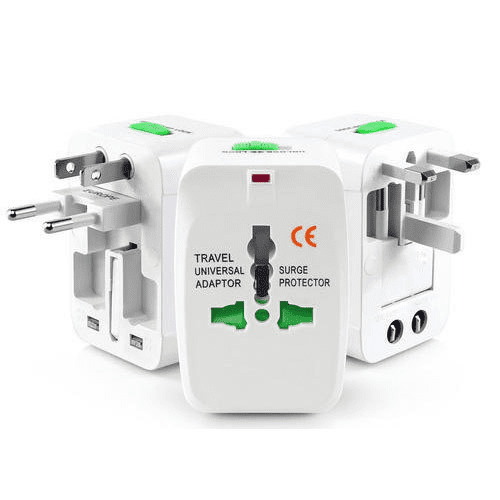 Rather, it simply converts the interface of one object to that of another object. This makes it different from the decorator design pattern, which adds new functionality to an existing object’s interface. The adapter pattern, as such, doesn’t change the object’s existing interface.

Again, as with real-life adapters, the client (i.e. user) cannot see the complex conversion executed by an adapter as it completely wraps an object. The latter isn’t even aware that it’s wrapped by the adapter. For example, an object that functions in grams and kilograms can be wrapped with an adapter that converts such data to the imperial units of ounces and pounds. 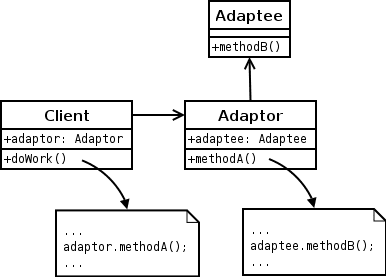 As this diagram shows, the Adapter gets an interface that is compatible with an existing object (i.e. the client). The client then uses this interface to call the adapter’s method (i.e. to execute a function). Once it receives this call, the adapter passes on the request to the other object (i.e. Adaptee), but in a manner that it expects.

What are Types of Adapter Design Pattern?

There are two types of adapter patterns,

Moreover, composition allows for greater flexibility as it makes it easier to change your existing code without breaking something else.

Both these reasons mean that the object adapter pattern is the more widely used method of the two.

As a custom app development company, we had the opportunity to use the adapter design pattern for a very unique real-life problem brought to us by a client.

The task in front of us was to develop a system that reads the parking data from different parking spaces and uses it to bill a client based on their usage.

The solution was obvious – use an adapter design pattern.

We used adapters to reconcile all these differences in data, helping create a system that seamlessly read data from different source formats and used it to bill the user.

When to Use Adapter Design Pattern?

Adapter design pattern can be used when,

By using the adapter design pattern, you can prevent the menace of duplicate code that often drags a project down. Instead, when confronted with classes that cannot work together because of incompatible interfaces, you can simply use adapters to keep your project on track, fast, and efficient.

However, the challenge in such situations is more about knowing the disease and less about finding the cure. Meaning, you should first recognise the problem affecting your project and only then decide which software design pattern can help you move forward.

As a Web Design & Development Company for close to two decades, we’ve successfully employed the right design patterns to reduce the ‘Go to market’ time for our clients while keeping the underlying code efficient, maintainable, and scalable. To know the right approach for your project, get in touch with us by hiring dedicated developer now.

And if you liked this post, do subscribe to get informative posts about web and mobile development, data analytics, and eCommerce delivered to your inbox. Thank you for reading!