Why Vue JS is the Best Front End Development Framework in 2023? 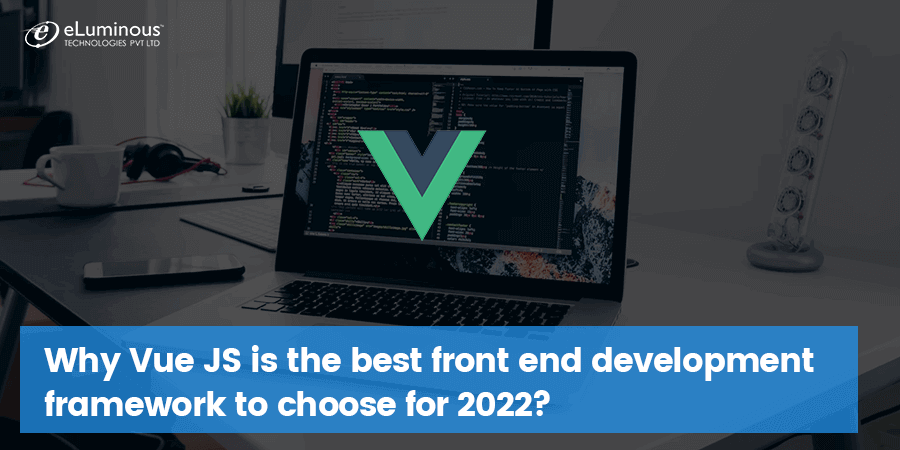 Vue.js is a progressive JavaScript framework for creating modern app user interfaces without consuming a large number of resources. Almost every company and brands are now concentrating on developing an intuitive user interface and including the necessary interactive elements. They are also taking into account the most recent mobile app UI trends while designing the appearance and feel of their app.

With so many frameworks to select from, the point of the article is to demonstrate why Vue.js is the finest JavaScript framework for 2022.

To compete in a growing market, you will need ambitious Modern Web Applications that require Modern Web Solutions to save time, effort, and money. Vue is a popular JavaScript framework that provides tools needed to build sophisticated apps without all of the complexities that come with app development.

Read a detailed comparison on Angular, React and Vue

You can hire front end developers to encapsulate front end code into powerful components that can be deployed and reused to build complex Apps with Vue. Vue’s reactivity mechanism perfectly syncs state changes to DOM updates, allowing you to focus on your app logic rather than direct DOM operations when utilising HTML, JS, and CSS. Vue is appropriate for projects of all sizes, from small solo projects to enterprize level software applications. HUAWEI, Alibaba.com, Adobe, Apple, Google, Nasa, Netflix, BMW, and Microsoft, among others, have trusted Vue to meet their needs for years.

So, why has Vue become so popular in such a short period of time?

It’s easy to get started using Vue. You may rapidly start constructing your own Vue apps if you have a basic understanding of HTML, CSS, and JavaScript. But it doesn’t have to be that way. Vue offers built-in support and APIs to scale for your expanding needs, whether your firm uses TypeScript or wants a framework that can scale. Vue is also created for developers, with strong tools like Vue DevTools, which provides us with vital insights into the apps, and Vue CLI, which allows us to easily build and manage complex projects.

Vue is built to be adaptable in gradual incremental. You get the flexibility to develop powerful Single Page Apps from the ground up using modern build tools, or you can use vue as a library for progressive upgrades without the need for build tools if you’re working on legacy code that doesn’t require a full rewrite. As your project grows, you’ll need capabilities like routing, state management, and testing, which are all part of the official Vue ecosystem.

All of these abilities are included in a 20kB minified g-zip library at runtime, which may be reduced even further to 12 kB by importing only the parts of the library that you require using modern build tools. Front-end development services providers can help you develop complex apps customized to your needs.

To update the DOM efficiently, Vue’s rendering method makes use of powerful compile time optimizations. Only the relevant components of an application are updated with Vue’s precise reactivity system, ensuring that your app remains quick at scale. You may also use straight JavaScript render functions to describe complicated reasoning. As a result of all this, rendering times are lightning quick.

Vue.js is considered by many to be the best of both worlds. A front-end development company with experienced dedicated developers can help you develop the best-in-class single page app. Because the Vue project began with the goal of creating a light-weight framework based on the best parts of Angular, it has acquired the best principles while using a far better syntax. Component-based approach, props, one-way data flow for component hierarchy, performance, virtual rendering ability, and appreciation of the need of proper management of apps are all React features. Hire VueJs developers to incorporate some Ember principles as well as those from other frameworks and libraries. The vue ecosystem, for example, includes the vuex library, which is based on Facebook’s Flux framework.

For many developers, the component-based architecture that allows robust scalability is the most compelling feature of vue.js. You may add vue to an existing website or construct one with any other framework or plain JavaScript to make it dynamic and reactive, and you can also design complicated apps fully in vue with the aid of supporting libraries.

In web development, Vue.js makes use of components. In addition, for future growth, a component-based design is strongly suggested. Components offer a great deal of adaptability and flexibility in order to satisfy the project’s needs. Vue’s components are loosely connected, which reduces development time while also increasing code reusability.

Vue.js is a user-friendly, adaptable, and fast JavaScript framework that aids in the creation of more manageable and testable code. It has a very simple learning curve. If you know basic HTML, CSS and JavaScript, you can simply get started with Vue.js and develop your Vue apps/websites in minutes. It’s extremely flexible: you can use it as a library in your existing project or transform it into a framework capable of creating complicated business logic and reactive UI with the aid of supporting libraries like vue-router and vuex. Server-Side Rendering is also supported by Vue. Vue is a progressive adoption ecosystem that expands from a library to a full-featured framework.

The core library is under 20kB min, with a blazing fast virtual DOM in the g-zipped runtime. Vue provides a WebPack-based CLI that is already optimised, saving you a lot of time and work.

Vue.js provides HTML-based templates that dramatically increase the productivity of developers, particularly those with HTML knowledge. Vue’s HTML templates can also aid in the implementation of reactive features in existing web apps. The virtual DOM render feature in the HTML templates created by Vue.js will give just a minimal amount of DOM operations throughout the state change. Custom HTML tags are also supported by Vue.js. Component names can be used as HTML tags to inject components into HTML.

Vue includes a large array of web development tools, libraries, community initiatives, and open source projects. Vue-router for routing and mapping, Vuex for state management, and vue materials for design are among the most noteworthy of these tools and libraries. In addition to the aforementioned, Vue includes its own set of development tools, including vue cli, a VS Code addon called Vueter, and more.

Vue has garnered not just popular among developers globally, but also among industry titans, thanks to all of the benefits listed above. Facebook, Netflix, Adobe, Alibaba, Grammarly, GitLab, and Behance are just a few of the firms that use Vue.js.